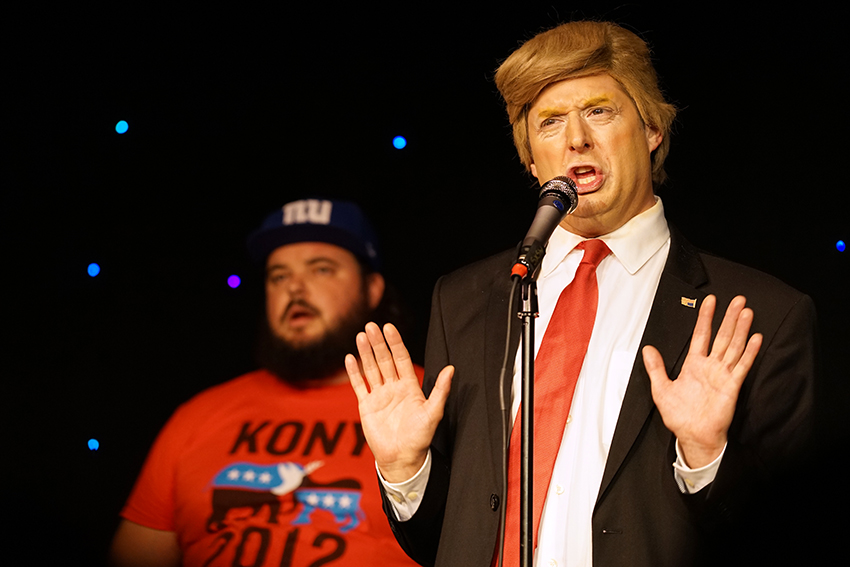 It’s six months in the future. All of the Supreme Court Justices are in hiding. Minorities are “learning to concentrate” in confinement camps. A concrete wall lines the border between America and Mexico. This is the future imagined by comedian Anthony Atamanuik as he took the stage as Donald Trump on Monday night at Hideout Theatre.

“I'm real," Atamanuik said. "I'm really happening. So you better get on board, and you better stop being silent.”

Atamanuik, a member of improv and sketch comedy group the Upright Citizens Brigade, is touring the country as Trump with the "Trump vs. Bernie Debate" comedy show. The comedian made a stop in Austin to deliver an hour-long Trump press conference for South By Southwest Comedy.

To the tune of ACDC’s “Back In Black,” Atamanuik walked out in a full suit and wig, his cheeks bronzed to mimic Trump’s “rust-colored” glow. Jon Gabrus, another UCB member, trailed behind him playing Chris Christie in a Kony 2012 T-shirt and high-waisted sweatpants.

Atamanuik kicked off the mock press conference by celebrating his presidential victory with Gabrus as his vice president. He proceeded to go down the line, insulting each of the defeated Republican candidates, most notably calling out Carly Fiorina’s appearance and naming her the official White House horse.

Fiorina wasn’t his only female target. The misogyny continued when he explained that he and Megyn Kelly do in fact get along — for three weeks out of the month.

“Basically I have a very spotty relationship with her,” Atamanuik said. “In other words, it ebbs and it flows really.”

No one was off limits. Atamanuik took a stab at Pope Francis, who has spoken out against Trump in the past.

“What a joke,” Atamanuik said. “I want to call him Pope Loser the Second."

Race was also on the table during “Trump’s” remarks. In one of his first Presidential actions, Atamanuik established a point system for social power based on race, with white males at the top.

“[White power] is limitless in this country, absolutely limitless,” Atamanuik said. “Unbelievable. It’s really great and it’s really wonderful. It’s been running this country for 200 years and most of you already are powered by it — and you don’t even know.”

While exaggerating Trump’s political beliefs and the controversies of his campaign, Atamanuik made clear that his purpose was to alarm his audience of Trump’s rhetoric.

“It's so uncomfortable," Atamanuik said. "I want you to realize I'm real and there's nothing I've said tonight I haven't said multiple times. If you think I'm scary, do something about me.”