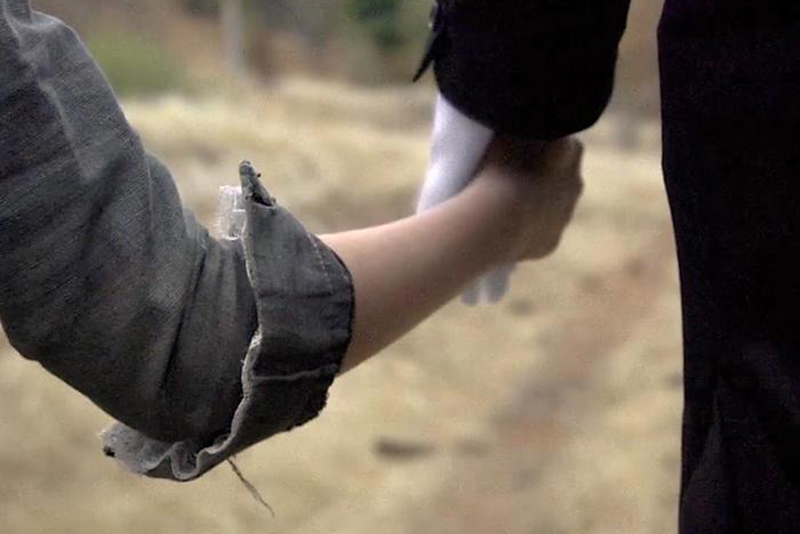 On May 31, 2014, 12-year old Wisconsin girls Anissa Weier and Morgan Geyser stabbed their friend Payton “Bella” Leutner 19 times and left her for dead. They attempted to murder her out of a delusional desire to become servants to a fictional horror character, Slenderman. Payton survived the incident, and Anissa and Morgan were sent to prison.

To understand how this bizarre and disturbing incident took place, director Irene Taylor Brodsky takes us into the impressionable minds of two young girls in “Beware the Slenderman,” a chilling documentary that also explores the impact of the Slenderman meme on popular culture.

For those not in the know, Slenderman is a pale, faceless figure dressed in black suit who kidnaps children and kills them. He first appeared in pictures manipulated for a Photoshop contest, and he’s became an iconic figure in online horror stories. As scientist Richard Dawkins notes in the film, a meme is like the virus of the mind – it replicates and spreads from person to person, and that is where the concept of Slenderman derives his staying power.

Brodsky suggests the girls, who were outcasts in their school, found solace from bullying and loneliness in their belief in Slenderman, which explains why they were eager to appease him. Anissa especially may have seen Slenderman has a kind of guardian, rather than a demon.

While she crafts an opening sequence involving Slenderman which resembles that of a horror film, Brodsky does not turn Anissa and Morgan into monsters, instead illuminating their personalities and early years through multiple interviews with their respective parents. Both girls grew up with loving mothers and fathers who had no idea how strongly they believed in Slenderman. In addition to her fixation on Slenderman, Morgan suffers from a form of schizophrenia inherited from her guilt-ridden dad and consequently believes in her imaginary friends as well.

Brodsky captures the tragedy of the crime for both girls’ families. If you enter the film despising their parents, believing them to have failed on some fundamental level, then you will leave sobered and solemn. We see the pain of the stabbing stretch far beyond Patyon’s wounds as the families put their raw emotions on display – we see the curse of the Slenderman made real.

While the Weier and Geyser families are sufficiently humanized, it’s hard to say whether viewers will leave feeling just as sorry for the girls. Morgan is, perhaps, the more tragic figure and less culpable, a victim of a terrible, hallucinatory illness.

On the other hand, Anissa remains somewhat of a cypher. Why does she believe in the Slenderman? Not even Brodsky can answer that question.

Footage of the police’s interrogation of Anissa and Morgan is also interspersed throughout the movie. Anissa and Morgan blame each other for plotting the murder of Payton, and both appear to lack an understanding of what exactly they’ve done. Sure, they mention they don’t like the idea of killing, but neither seems to grasp what taking a human life actually means. Through these clips, Brodsky underscores that these girls are immature, unable to draw the distinction between imagination and reality, and should not be tried as adults.

“Beware the Slenderman” approaches its subjects with empathy and depth. It’s a thoughtful picture filled with great analyses of how children think and demonstrates the power of the internet on young, malleable minds.