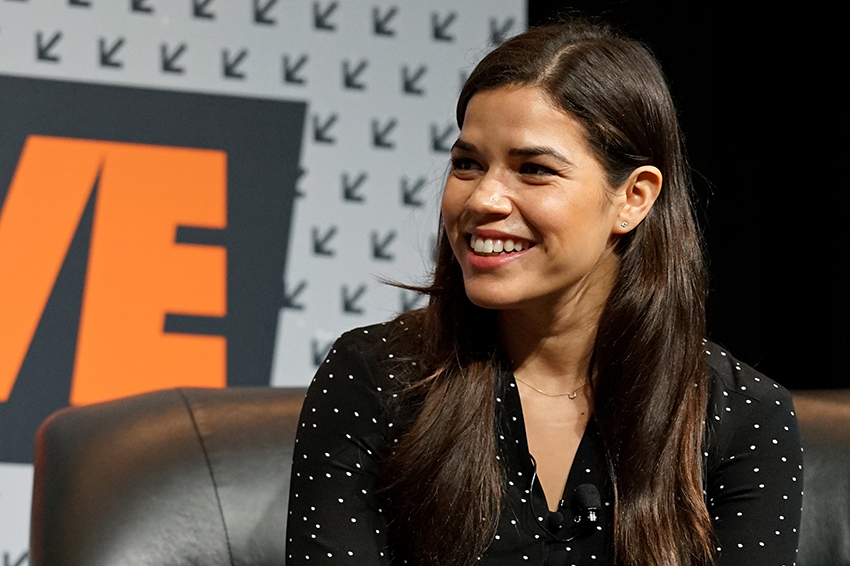 On Tuesday, actress and activist America Ferrera spoke to a half-empty room to discuss the Latino vote.

“I think we can address the elephant in the room and say it’s not a packed house, and I think that’s interesting,” Ferrera said. “I think it’s important to acknowledge that this is where we’re at with this conversation — this is the level of interest.”

Before Ferrera took the stage, Maria Teresa Kumar, CEO and co-founder of civic engagement organization Voto Latino spoke not only about the growing number of eligible Latino voters, but the issues those Latinos face.

Due to everything from record deportations to hate crimes, she said Latinos are constantly made to forget that they are American.

Kumar cited a recent incident in Fairfax County, Virginia where a teacher let a parent know her son’s third grade classmates teased him “because of the color of his skin."

“I just got a call from my son’s teacher giving me a heads up that two of his classmates decided to point out the ‘immigrants’ in the class who would be sent ‘home’ when Trump becomes president,” mother Evelyn Momplaisir said in a Facebook post Kumar read aloud to the audience.

Later, Ferrera chimed in, informing the audience that she first became involved with Voto Latino because of discrimination on UT’s campus. In 2013, Twitter users let Ferrera know that the Young Conservatives of Texas were planning a Catch an Illegal Immigrant Game on campus.

Together with Voto Latino, Ferrera flew to Austin to rally protesters against the event. Upon her arrival, she said she was stunned by the lack of support from administrators and adults on campus.

In order to bring attention to these issues and solve them, Kumar said that Latinos are going to have to become active participants in the government. Ferrera said taking leadership roles should come naturally for Latinos, because oftentimes at a young age they’re forced to act as middlemen and translators for their non-English speaking parents.

"What’s particular about [Latinos] is that they are natural born leaders or made to become leaders very quickly in their homes or in their families,” Ferrera said. “So how do we translate that to leaders in their community?”

To help get Latinos engaged in elections, Kumar launched VoterPal, an app that targets millennial voters and allows them to register their families and friends to vote. Ferrera said the app is allowing everyone the chance to become an organizer.

"If we don’t raise our voices, we’re leaving it to money and politics,” Ferrera said. “We have to stay present. We have to stay loud. We can’t just go back to sleep after we’ve voted after November 4."