Longhorns have things to fix as conference play begins 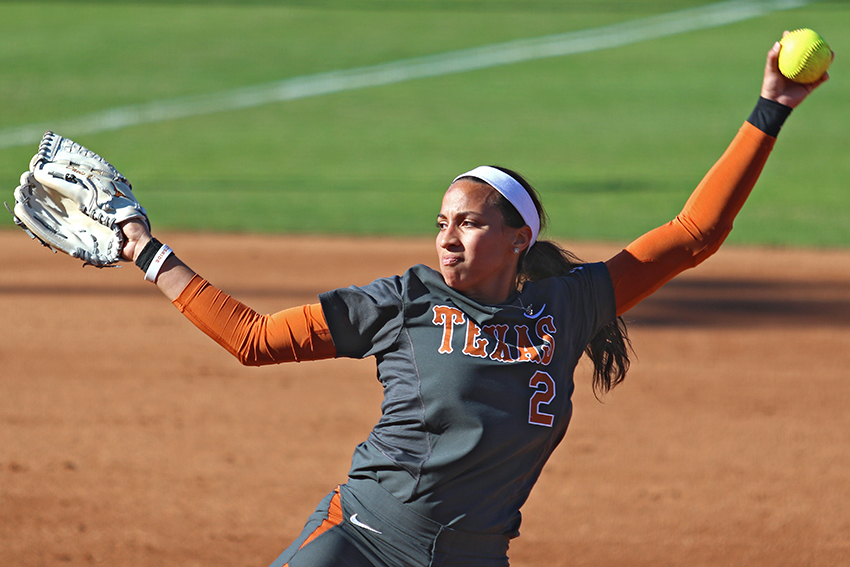 Texas is halfway through its regular season, and the Longhorns have performed well thus far. But as conference play begins on Friday, Texas will need to up its play if it wants to contend for a Big 12 title.

The Longhorns (19–6) will kick off conference play against Baylor (23–6) in Waco. Texas was picked to finish third in the Big 12 in the preseason coaches poll, behind defending conference champion Oklahoma along with Baylor.

But if Texas wants to surpass those expectations, it will need better production from its pitching staff and a more consistent offense.

The Longhorn pitchers have performed well, but walks and injuries have been an issue. Junior lefty Tiarra Davis leads the staff with a 1.64 ERA and 11–5 record but has walked 42 batters. Sophomore Paige von Sprecken has been streaky, notching 39 strikeouts but also giving up 32 walks and a team-high seven home runs.

Sophomore Erica Wright, who had a great freshman campaign, has yet to make her season debut as she continues to battle a rib injury.

“Erica’s still day-to-day,” head coach Connie Clark said. “The doctors are still doing their thing, and we’re keeping her motivated. It’s great to have her in the dugout staying in the mix. She’s charting for us, and she sees some things from pitchers that our hitters don’t even see, so it’s great having her talk to them.”

Texas shook up its lineup about a month ago to spark offensive production, and it’s worked — to an extent.

Senior center fielder Lindsey Stephens moved from the clean-up spot to the leadoff position and has found success. She leads the Texas starters in batting average and on-base percentage, and her 20 RBI are tied for second-best on the team.

The lineup changes, however, didn’t fix Texas’ troubles with laying down the bunt. The Longhorns have an abundance of speed throughout their roster, but they have struggled with leaving runners on base.

“We have to get bunts down — that’s going to be big for us,” Clark said. “I guarantee at some point we’re going to need that, and I see us do it in practice, but we haven’t executed it well in a game yet. We have to figure out a way to get that done.”

Another issue with Texas’ offense has been the lack of production from senior catcher Erin Shireman. She’s currently hitting just .226 with three RBI after a 10 homer, 46 RBI junior campaign. Shireman’s solid defense will keep her as the starting catcher, so her slump must end if the Longhorns want a lengthy post season.

Texas isn’t the most talented team in the Big 12, and the Longhorns will need to out-hustle and out-compete their opponents to win the conference. Despite the talent deficiencies, Clark still has high-hopes for her team.

“I love the compete factor of this team,” Clark said. “We have to get ready to face some great pitching, and our pitchers need to really attack the strike zone.”