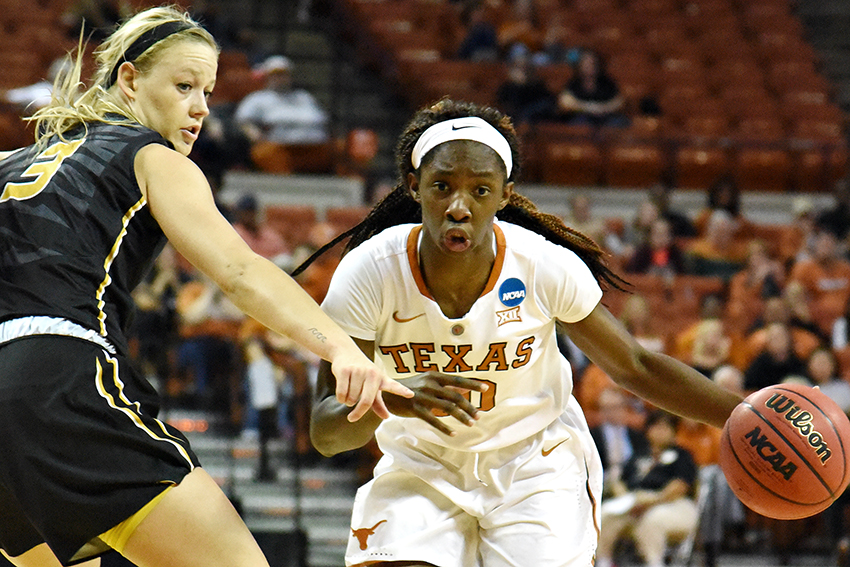 No. 2 seed Texas found itself trailing No. 3 seed UCLA 54-48 at the end of the third quarter with a trip to the Elite Eight on the line.

To make matters worse, sophomore guard Ariel Atkins and senior center Imani Boyette had three fouls each, and Texas had no answer for UCLA sophomore forward Monique Billings, who already had 18 points.

But a 10-0 run to open up the fourth quarter erased all doubt, as the Longhorns rallied to a 72-64 win in Bridgeport, Connecticut, securing their first Elite Eight appearance since 2003.

“I think we're extremely excited to be playing another day,” head coach Karen Aston said. “Our team has just impressed me all year long with their ability to be resilient. And this was a perfect example of really how we have been all year long.”

Texas led up until the 7:49 mark in the first quarter before going cold and trailing 11-17. The offensive woes continued in the second quarter, but sophomore guard Brooke McCarty and Boyette kept Texas within striking distance.

McCarty opened the second quarter with a layup, and when UCLA opened a double-digit lead, Boyette sinked a jumper to pull them back within nine. By halftime, UCLA still led but just by five. UCLA head coach Cori Close told ESPN her bench was responsible for the early advantage.

Boyette, however, had a different take on the first half.

Texas was better in the third quarter, but still not good.

A couple of layups from junior center Kelsey Lang pulled Texas to within one before McCarty made a three to knot things up at 35. Less than a minute later, sophomore guard Ariel Atkins scored two of her 11 second-half points to give Texas its first lead since the first quarter.

The two teams had a few lead changes before sophomore forward Monique Billings, who finished with 20 points and 12 rebounds, pushed UCLA’s lead back up to six at the end of the third quarter.

Aston said they tried to reset during the short break between quarters.

“I actually thought we had some good moments in the third quarter,” Aston said. “But it seemed like every time we made a run, we would relax and let them go down. And that was the main topic of conversation, which was, 'Let's try to get two or three stops in a row by not relaxing if we score.'”

Texas reclaimed possession of their game in the fourth quarter — that is, rebounding and stealing inbounds plays.  Boyette lead the late push with her 18 points and 10 rebounds after being held to seven points and one rebound in the first half.

Freshman guard Lashann Higgs also contributed with a fourth quarter inbounds steal, when she took the distance for a layup.

UCLA scored its first points midway through the fourth but could only get to within four the rest of the way as Texas punched its ticket to the Elite Eight.

Despite the big win, the Longhorns’ road to their first Final Four since 2003 will have to go through the heavy favorite to win the tournament.

Texas will face No. 1 overall seed and undefeated UConn for the second-straight season. The Longhorns fell 105-54 to the Huskies in the Sweet 16 last year.

Boyette said that loss and how last year ended motivated them to make sure they got back to this point.

“I think we were very aware in terms of our offseason about how we ended our season last year, so we tried to put in the work coming into the tournament and during the season so we could come in with a higher seed and try to our best to go as far as possible,” Boyette said.