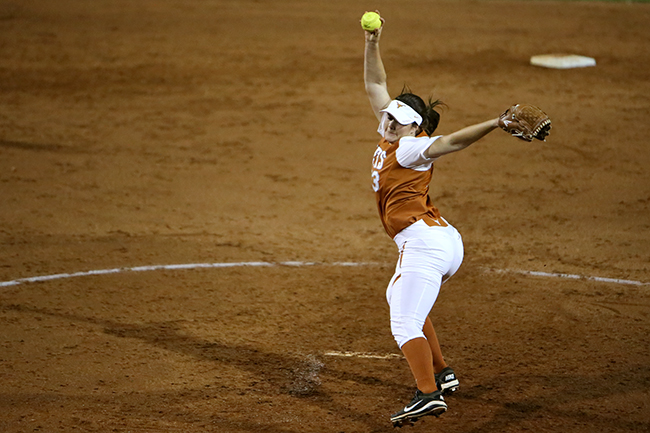 After five long days with no games, the Longhorns looked sluggish in their highly anticipated conference opener.

The No. 20 Baylor Bears jumped out to an early lead, and the lack of offensive production from Texas caused the Longhorns to fall 3-1 in front of a crowd of 1,519 on Friday night — the third-largest attendance in Getterman Stadium history.

“I like the competition,” senior catcher Erin Shireman said on 105.3 FM after the game. “It’s always back and forth with a great atmosphere; most games are sold out like today. This time we didn’t come out on top, but we have two more to come back and win the series.”

Shireman was the only Longhorn who found success against Baylor’s senior ace Heather Stearns. She notched both Texas hits, including a solo home run in the fifth for the lone score. Stearns, who leads the Big 12 in strikeouts, tabbed six strikeouts against the Longhorns and gave up no walks.

Texas junior pitcher Tiarra Davis, however, issued five free passes and threw two wild pitches that helped Baylor secure the win. She pitched a solid game with seven strikeouts and an off-speed pitch that kept the Bears guessing, but walks proved to be her kryptonite.

The Longhorns had some ups and downs defensively against Baylor. Shireman gunned down a would-be base stealer in the third inning, and junior third baseman Celina Felix flashed the leather with some solid plays on the hot corner. But in the sixth, senior second baseman Stephanie Ceo committed an error that helped load the bases and lead to Baylor’s final insurance run.

“It always will come down to us and our execution,” head coach Connie Clark said before the series on Thursday. “To win championships, our pitchers have to eliminate free passes, and we have to do the little things and take care of the fundamentals.”

Texas lost its series opener against the Bears last season as well, but turned it around to win the next two games and take the series. If the Longhorns want to repeat history, they will have to find a way to win in Waco, which they haven’t done in four straight games.

Game 2 of the series will start at 8 p.m. Saturday and can be seen on ESPN2. The series finale will take place on May 14 in Austin.