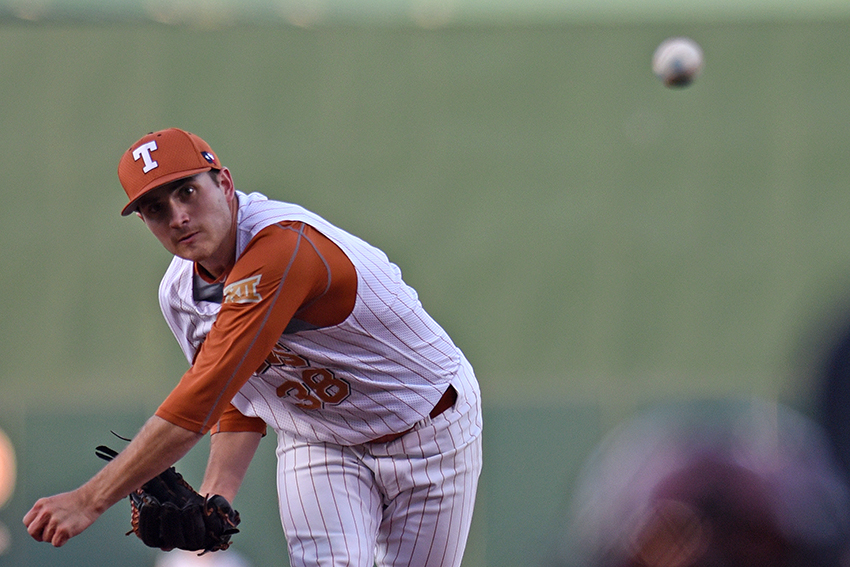 Texas took its first lead against No. 6 TCU on Friday in an innocuous fashion. Freshman shortstop Kody Clemens grounded into a double play, scoring freshman Tyler Rand from third but ending the Longhorns' rally by clearing the bases.

Barerra soaked up the mammoth ovation from the Longhorn crowd, calling on the 4,004 people in attendance to get on their feet. They obliged his message.

“When we’re winning, Texas fans are the greatest,” Barerra said. “But sometimes when you struggle like we did early in the season, they tend to fall out. Hopefully we can get them back tomorrow and get it rocking.”

The first four frames featured scarce offensive production from both teams. Senior pitcher Ty Culbreth cruised for the Longhorns, allowing just two baserunners as TCU’s Brian Howard struck out seven Texas batters. While each team threatened with runners in scoring position in the second, neither could break the stalemate.

“My goal is to keep my team in the game as long as possible,” Culbreth said. “I don’t feel like I have to strike everybody out or do too much. It’s just one pitch at a time.”

In Culbreth’s favor was a stellar Longhorns defense. Texas spent much of nonconference play fumbling the baseball, making numerous errors in key moments. But a newly solidified infield came to play on Friday night — most notably Barerra at the hot corner.

Formerly serving as the Longhorns catcher, Barerra proved solid 90 feet down the line, looking comfortable in his new position. Barrera made an acrobatic stop to end the third inning, diving to his right before firing a rocket to first.

“I’m getting more comfortable there as the days go by,” Barerra said. “I played there when I was in high school, so I’m trying to get back over there and have some fun with it.”

The Horned Frogs threatened in the sixth, loading the bases with one out. But just as they had on Thursday, the Longhorns were the recipients of some timely pitching. Culbreth induced a 6-4-3 double play to end the inning, leaving the contest scoreless.

After capitalizing in the sixth, it was up to the Longhorns bullpen to secure the victory. Texas came through once again on Friday night, slamming the door on TCU’s potent lineup. Sophomore pitcher Connor Mayes secured his second consecutive save, as a flyout to center field gave Texas its second win of the series.

“If we can establish a 7-8-9, no starter feels like they have to do too much,” Culbreth said. “We can just hand the ball off, and [the bullpen] can do their job.”

Texas will go for the sweep against TCU on Saturday as sophomore pitcher Kyle Johnston takes the hill. First pitch will be at 2:30 p.m.