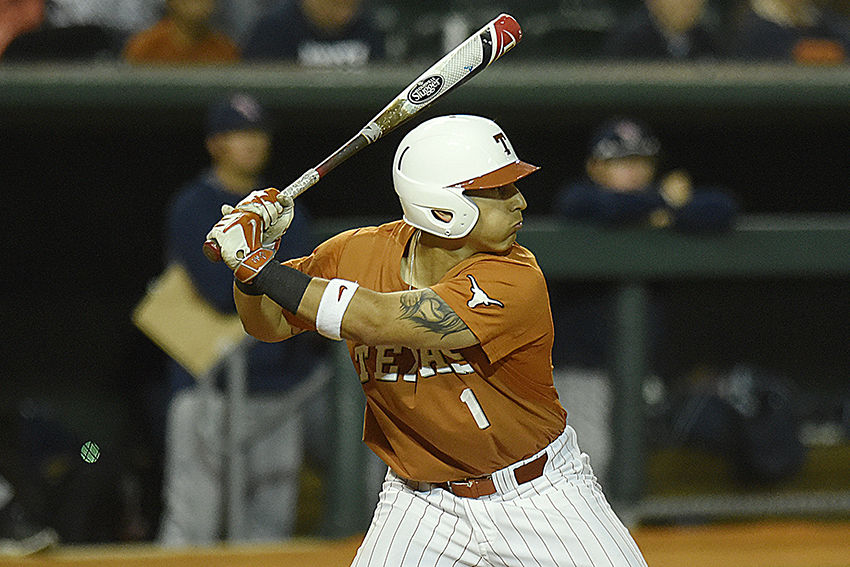 Tres Barrera stomped on home plate during Saturday’s contest with No. 6 Texas Christian University as his mammoth home run tied the game at 5-5. The junior third baseman smacked his second dinger in as many days, and once again soaked up a raucous cheer from the UFCU Disch-Falk Field crowd.

Unfortunately for the Longhorns, that would be the last ovation of the day. Texas failed to score another run after Barrera’s blast, falling to TCU 9-5 in the series finale.

Saturday’s loss dropped Texas’ season record to 11–13. But after taking the series’ first two games on Thursday and Friday, the Longhorns stayed positive after the game.

“We took a step forward this weekend,” head coach Augie Garrido said. “Two and one to start the conference and we move forward with an opportunity to build off of the positive innings we’ve had.”

Neither starting pitcher lasted long on Saturday. TCU pulled junior pitcher Rex Hill after just two innings of work, while sophomore Kyle Johnston went just two-and-one-thirds innings for the Longhorns. With a two-day break ahead, Garrido showed no hesitancy in going to his bullpen early and often.

Texas turned to reliever Travis Duke in Johnston’s absence, making his team-leading fifteenth appearance of the year. But Duke proved unable to hold the Longhorns’ early lead, allowing a run to score in both the third and fourth frames. Heading to the fifth, the Horned Frogs held a 4-3 lead.

TCU tacked on another run in the fifth. In a departure from the previous two games’ stellar defense, Texas committed an error as sophomore catcher Michael Cantu flung a ball down the left field line on a stolen base attempt. The errant throw allowed the runner to advance to home, placing the score at 5-3.

“We understand that when you give them extra bases and don’t get your outs on time, and you throw to the wrong base, it adds up,” Garrido said.

Barrera ensured the contest would be a back-and-forth affair. His homer tied the game in the fifth, but was quickly erased as the Horned Frogs plated three more runs in the next half inning to grab the lead for good.

The Longhorns threatened in the seventh with runners at second and third, but the rally fell short. The hopes of a sweep eluded Texas, as TCU scored an additional run in the ninth and took the series finale 9-5.

Despite the loss, the Longhorns held their heads high as they walked off the field. The start of conference play provided the Longhorns with a reset button. And for the first time this season, Texas took advantage.

“It was a big step for us,” Barrera said. “We’re taking steps in the right direction, and we gotta keep rolling heading into Tuesday and next weekend.”