Longhorns fall to No. 20 Baylor on walk-off error 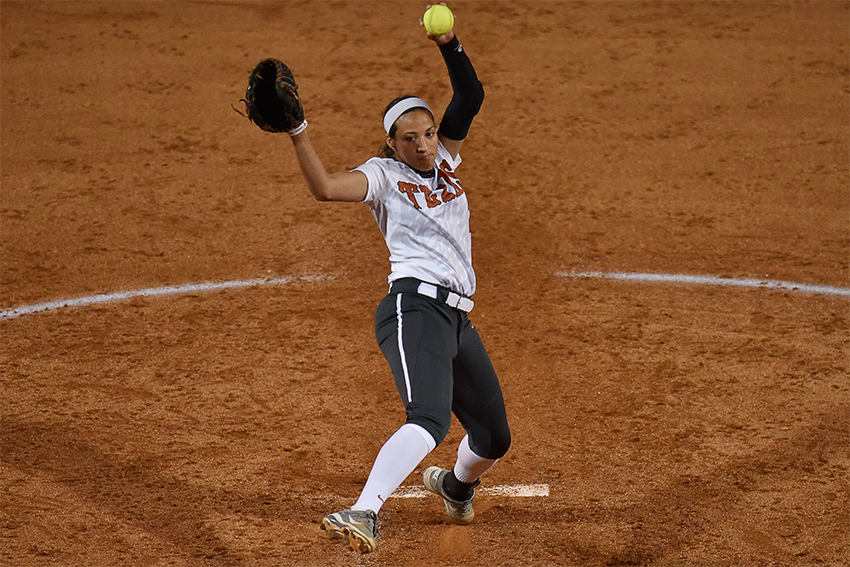 Texas and No. 20 Baylor brought March Madness to the softball diamond Saturday night in game two of their Big 12 opening series.

The game was slow and scoreless through the first two and a half frames, but the rest of the matchup was full of drama. The teams battled back and forth, but Baylor earned the walk-off, 6-5 victory.

Baylor got on the board first behind redshirt senior right fielder Linsey Hays’ two-run home run in the bottom of the third. Junior pitcher Tiarra Davis walked and hit the next batter up, but solid defense ended the frame.

Senior designated player Erin Shireman got the Texas offense started in the top of the fourth with a two-out bloop single to left. Sophomore catcher Randel Leahy followed with a deep shot off the center field wall that rolled into the right field corner and resulted in a two-run, inside-the-park home run.

“Really, I just wanted to help my team out,” Leahy told 105.3 FM after the game. “I felt really confident up there, and it definitely felt good.”

The Bears, however, got a bounce to go in their favor in the bottom half of the inning. Leahy dropped a third strike from Davis and her throw to first bounced off the runner’s helmet, allowing Baylor’s freshman designated player Kyla Walker to round the bases and score on a strikeout.

On the first pitch of the fifth inning, senior center fielder Lindsey Stephens ripped a solo home run to right field. Baylor pulled its senior ace Heather Stearns after the hit and the Longhorns took advantage.

Junior third baseman Celina Felix recorded a RBI-triple to give Texas its first lead. A sacrifice fly from senior right fielder Holly Kern scored Felix to give the Longhorns some cushion.

But Hays opened the bottom half of the inning with her second home run of the night, this time a solo shot to left-center. The sixth inning was scoreless and Texas was unable to add any insurance runs in its half of the final frame.

Davis walked the first two batters in the seventh, and a well-executed Baylor bunt loaded the bases with no outs. The Bears tied the game on a passed ball and won on a misplayed ball at shortstop. Baylor’s sophomore pitcher Kendall Potts earned the win in relief.

“We just need to keep our heads up,” Leahy said to 105.3 FM. “Not all of the pieces fell together tonight, but I’m really proud of my team and proud that we played positive throughout the whole game.”