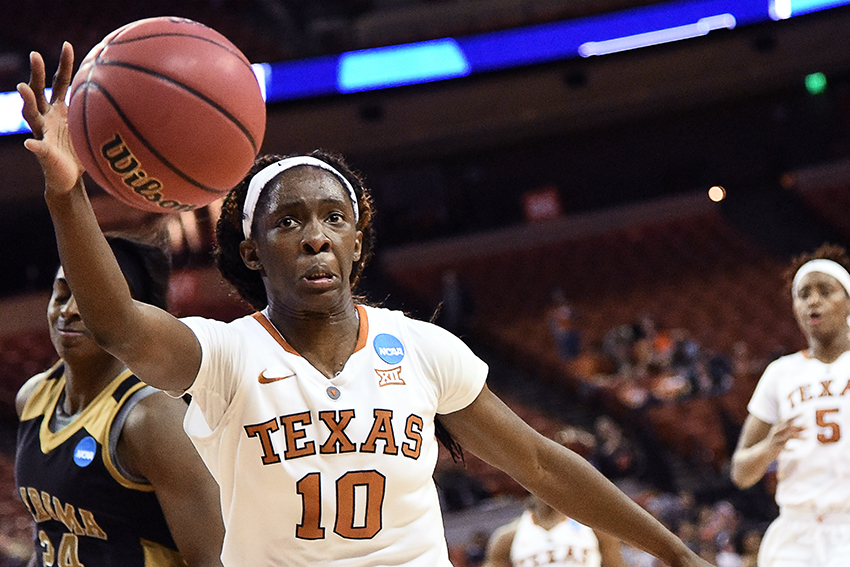 The deficit remained at five until midway through the second. A diving steal by sophomore guard Ariel Atkins forced a jump ball and gave Texas the chance to cut the deficit even slimmer.

But that’s not what happened.

Instead, Texas went on a 0-for-6 shooting drought before freshman guard Lashann Higgs made a jumper with just over a minute remaining in the half. The five-point deficit blossomed into 15 by halftime, en route to an 86-65 win for UConn.

Atkins lead Texas (31–5) with 19 points on 8-of-13 shooting, including 3-of-4 from beyond the arc. The Duncanville native’s 10-point first quarter kept Texas within reach in the first quarter. She also grabbed two rebounds, while recording three steals and two assists.

Higgs matched Atkins’ 19 points. The Bahamas native provided a spark off the bench on 9-of-19 shooting, while grabbing four rebounds and two steals.

No other Texas player scored over five points, including senior center Imani Boyette. The recently named AP All-America honorable mention finished her career with just four points on 2-of-6 shooting. Early in the game, Boyette appeared to be a step too slow, but head coach Karen Aston attributed it to excitement.

“I think it was the initial excitement of the game,” Aston told ESPN. “She seemed to be out of breath, but she’ll settle in.”

She didn’t settle in. In addition to committing six of Texas’ 14 turnovers, the big had no answer for UConn junior forward Morgan Tuck. Tuck led UConn (36–0) with 22 points on 9-of-14 shooting, including 3-of-4 from deep. When Tuck wasn’t forcing Texas’ bigs outside the paint, she was beating them in transition for easy baskets.

“They give me the ball when I’m open,” Tuck said to ESPN. “They guard [Moriah Jefferson and Breanna Stewart] pretty tough, so I’m open a lot of the time, so it’s pretty easy.”

While Tuck made it look easy, Texas didn’t go down without a fight. After falling behind by 21 early in the third, Texas went on a 9-0 run to cut the lead to 42-54.

McCarty kicked off the run with a three, and senior guard Empress Davenport followed suit just 22 seconds later. Atkins’ three pulled Texas within 12, but Tuck answered with a jumper at the other end. Texas wouldn’t get closer than that, as UConn proved to be too much.

The loss, which was Texas’ first appearance in the Elite Eight since 2003, puts the Longhorns at 31–5 on the season.