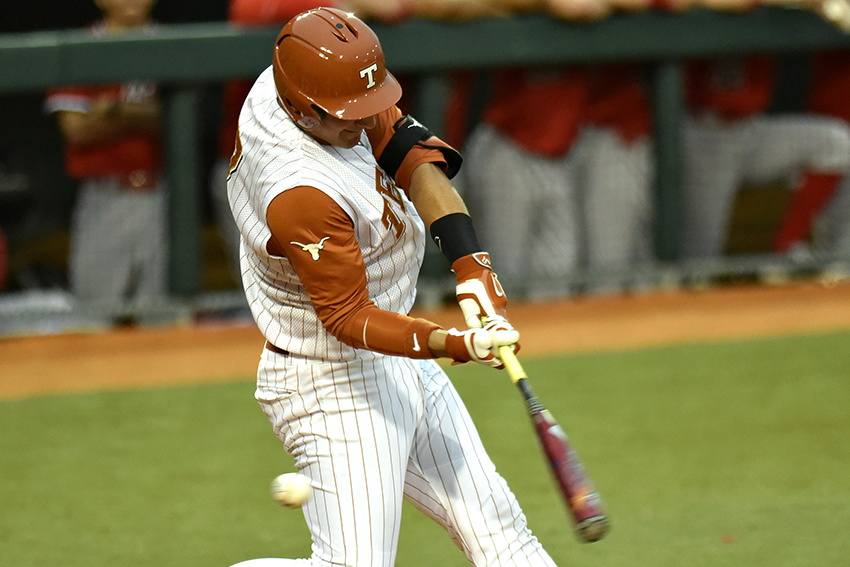 Six great innings by the Texas bullpen and freshman catcher Michael Cantu’s continued resurgence at the plate balanced struggles by the rest of the offense to hold the Lamar Cardinals to a 2-2 stalemate through eight innings.

But then the Longhorns suffered another calamitous ninth inning.

An infield single led to a sac bunt and intentional walk, which set up a single and an error that led to two runs. By the time the inning was over, Texas walked off the field with the scoreboard reading 4-2 in Lamar’s favor.

“We got outplayed,” head coach Augie Garrido said. “They hit the ball harder, more often and in more directions throughout the entire night.”

The Cardinals jumped on the Longhorns early. With two outs in the second, Lamar designated hitter Robin Adames split the left field gap for an easy double. A pair of singles plated another run to put Texas in a 2-0 hole in the early going that it would never be able to overcome.

The Longhorns countered with a run-scoring sacrifice bunt by freshman infielder Kody Clemens in the third followed by a two-out single in the sixth by Cantu that evened the score up at two runs apiece.

Cantu’s game-tying single was the latest in a recent series of strong performances at the plate for the formerly slumping catcher.

“He’s seeing the ball a lot better,” Garrido said. “Once he gets his confidence and builds off of being able to make contact, then of course the power’s in there to generate home runs and extra base hits and drive in runs.”

But Texas could do little else on offense to reward the bullpen’s efforts. The Longhorns tried to manufacture runs, but popped a few bunts up and ran into more outs than opportunities on the base paths.

“We have to do a better job recognizing pitches in those moments where the momentum shifts are important,” Garrido said. “But you have to give yourselves more chances than that. You can’t just have one chance and expect it to work out.”

The tie broke unceremoniously in the ninth inning. Newly christened sophomore closer Connor Mayes came in and immediately surrendered an infield single to short. After a sac bunt and an intentional walk put two men on, an RBI single into the left field gap compounded by a misplay in the damp outfield by freshman outfielder Tyler Rand pushed across a pair of runs to give Lamar a 4-2 advantage.

Texas’s ninth-inning counter consisted of three straight outs punctuated by Rand watching what he thought was ball four sail past him for a game-ending strikeout.

“We need to manage our strike zone better,” Garrido said. “When the momentum changes are about to occur is when we over-compete, and that’s when we strike ourselves out on ball four.”