Texas bounces back after difficult weekend 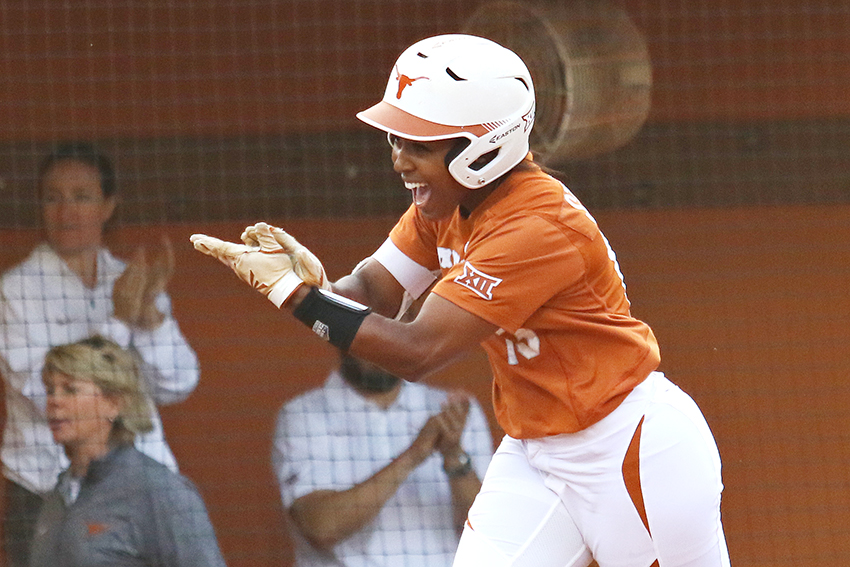 Down 2-1 in the bottom of the third, Lindsey Stephens approached the plate. The senior centerfielder had seen Texas give up the lead a half inning before, placing the Longhorns in a hole.

The Longhorns looked prime to drop their second-straight against Texas State, but Stephens had other ideas.

Stephens took a 2-2 pitch from Randi Rupp and rocketed a game-saving homer over the fence at McCombs Field. The home run regained Texas’ lead, which it would hold en-route to a 3-2 victory.

“[It’s] definitely an important win, especially after such a hard loss against Baylor,” Stephens said. “The fact that we were able to work together and string something along, and it wasn’t that easy but we were able to overcome that loss.”

The Bobcats put the Longhorns behind in the top of the third inning. Following a double by Texas State’s Kelli Baker to tie the game at 2, Texas junior pitcher Tiarra Davis walked back-to-back batters to load the bases. Davis then hit the next batter, forcing in the go-ahead run for the Bobcats. She got a groundout to end the threat.

“I was just having a tough time finding what pitch I could throw for a strike,” Davis said. “Then Randel came out, we talked about it, got on the same page, and the defense was there to back me out of it.”

Davis finished the game with three hits, four strikeouts and six walks. Head coach Connie Clark said she knows Davis is in a rough patch but was happy with how she fought back to finish the start.

“I was proud of her,” Clark said. “She came down here, mid-game, worked on a couple of things in the bullpen and then was really, really solid the last three innings. I think that tells you about her mindset of just trying to make the best of a night where she didn’t have the best stuff.”

The Longhorns were confident entering the series. Agitated by a lower-than-expected ranking, Texas felt as though it had something to prove. But the ranking proved prescient as the Longhorns dropped both games, 3-1 on Friday and 6-5 on Saturday.

Texas faces BYU in a three-game series this weekend, starting Friday at 5 p.m. The Longhorns resume conference play on April 8 with a three-game home series with Texas Tech.