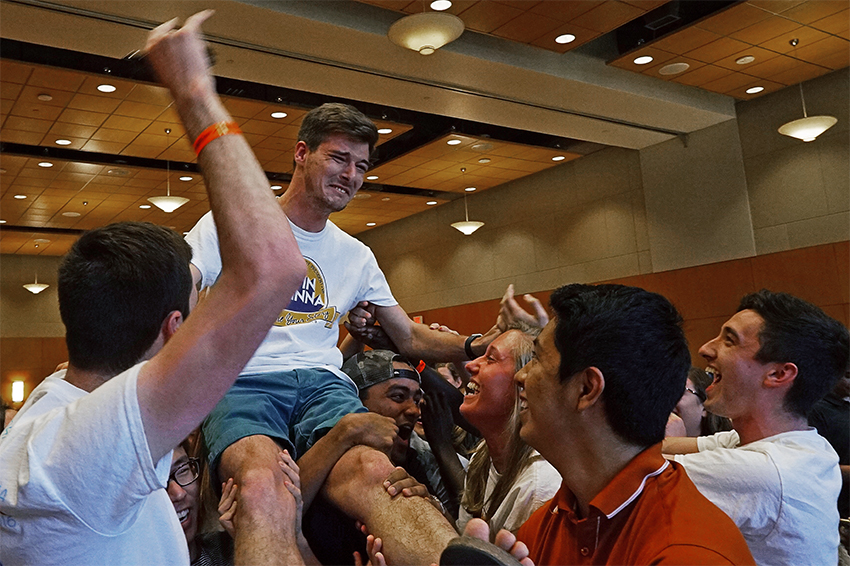 Kevin Helgren and Binna Kim won the Student Government executive alliance race Thursday with 51.03 percent of the vote in a runoff election against candidates Kallen Dimitroff and Jesse Guadiana.

Helgren and Kim’s campaign platform was centered around the theme “Share Your Story,” which the candidates describe as a movement to encourage students to express their personal background and experiences. Their platform included points such as creating a mental health week to address the stigma surrounding mental illness and starting a national conversation regarding the problem of sexual assault on college campuses.

“I’m really happy,” Helgren said. “We have a lot of work ahead of us, and we’re excited.”

The runoff election was the third and final executive alliance race this year and generated greater voter turnout than last week’s regular election — 6,836 votes compared to 6,667.

Dimitroff said she is relieved to be finished with the election.

"[We are] honored by those that stuck with us, and best of luck to the new administration," Dimitroff said.

Emily Puig, advertising senior and a member of the Dimitroff-Guadiana campaign’s outreach team, said despite the results the team is happy with the effort shown throughout the campaign.

“While it is disappointing, I’m still so proud of our team, especially Kallen and Jesse. We made huge strides during this runoff and it’s because our we all
really believed in what we were fighting for.”

Helgren said he and Kim want to begin their term in office by speaking with the SG assembly about this year’s six week executive alliance election process.

“I think something that Binna and I recognized in light of the prolonging of the executive alliance race, is that all the U-wide and first-year reps were swept under the rug with all the drama,” Helgren said. “At the beginning of next week, we want to have ‘real talk’ with the assembly. We want to have all the assembly members in a room, and we want to take all the conversation about the tarnished election process, get our feelings out, and then box those feelings up and push it behind us so we can move forward from here.”

During the campaign process, Helgren and Kim maintained an active presence on social media by encouraging supporters to use a campaign overlay on their Facebook profile pictures and “share their story” through their captions.

Kim said she and Helgren did not run for student body president and vice-president just to campaign.

“Having the campaign over is a relief, but the first day of our job is the reason we decided to run from the beginning,” Kim said. “Having our eye on the prize wasn’t the win, but the work.”

Helgren said he and Kim will schedule a meeting with President Fenves and spend the summer establishing relationships with UT administration.

“We hope to work on many platform points during the summer to make sure we’re fulfilling our promises to the student body,” Helgren said. “We want to nourish the relationships necessary to make change happen.”

Garrett Mireles, advertising freshman and public relations coordinator for the Helgren-Kim campaign, said he is pleased about the sustained voter turnout in this year’s election.

“I think it’s important to recognize the hard work of both teams,” Mireles said. “I was happy to see voter turnout increase and sustain itself through the re-vote and the run-off, even if it was less than the original vote. I was happy people exercised their right to vote.”

This article has been updated since its initial publication to include comment from Kallen Dimitroff.