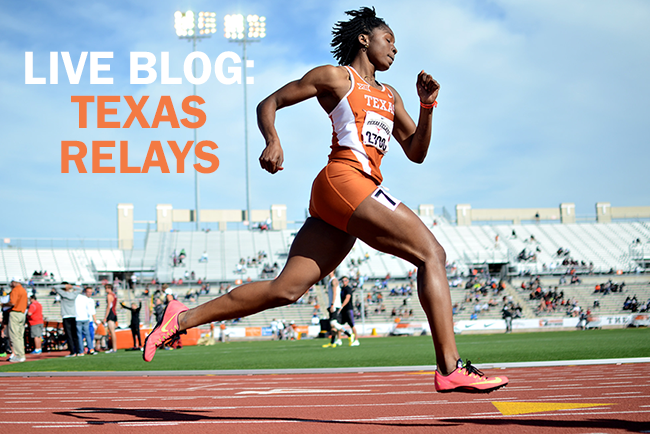 
Update (10:07 p.m.): Jones and Robinson win 400-meter hurdles
No. 1 sophomore Ariel Jones dominated the competition with a 57.17 second first place finish in the women’s collegiate division. After yesterday’s fall, junior Byron Robinson failed to make the finals of the men’s collegiate division, so he was entered in the invitational with professional runners. Robinson finished on top with a time of 50.48 seconds.
— Leah Vann

Update (6:06 p.m.) Comments from the head coach, Mario Sategna:
On McCloud’s high jump:
“Great to see McCloud finally over the 7 foot barrier, that’s a huge accomplishment. You could see the excitement from the staff to the athletes who were cheering him on. He’s not done, definitely a 7’ 2” guy. Definitely has a chance to advance to national finals.”

On Asa Garcia’s triple jump win:
“To win the A Division here at relays as a true freshman says a lot. She’s really hitting full stride at the right time.”

On running events:
“Our people need to learn to deal with adverse conditions sometimes. I’m glad Coach Tonja didn’t waiver to make them. They stuck by their guns and they did what they had to. The 4×100 was mainly about getting the stick around, I know the women will run a lot faster tomorrow. The men’s did a great job of not just getting the stick around.”
— Leah Vann

Update (6:03 p.m.): McCloud all smiles after clearing his first 7 foot bar:
“I’ve been going after that 7 foot bar since high school. I don’t even know how to explain it. It was so exhilarating the rush I got and I knew I wasn’t done, so I had to keep my composure to get ready for the next bar.” — McCloud
— Leah Vann

Update (5:59 p.m.): Asa Garcia comments on her performance:
“I had a different mindset coming in. I wanted to do well because I didn’t have the best indoor season. We’re at home so I’ve got classmates, family, alumni, people who live in the area… Everybody is watching, which is definitely a pressure.” — Garcia

“I usually run with my legs behind me and my chest forward, which makes me slower and puts me in a bad position off the board. Today, my mechanics were better and I was fast off the board.” — Garcia
— Leah Vann

Freshman Asa Garcia recorded a leap of 13.29m (43 feet 7.25 inches) to take first in the women’s A division of triple jump. Her leap currently leads the NCAA this season.

Texas redshirt freshman Spencer McCloud was one of the last men standing in the men’s high jump B division. Neither McCloud or his competitor, Eddie Wilcox of North Texas, cleared the last height of 2.17m (7 feet 1.5 inches), but Wilcox cleared the previous height in fewer attempts to grab the gold. Although McCloud took second, he beat his outdoor personal best of 1.93 m (6 feet 4 inches) by clearing 2.14m (7 feet ¼ inches).

Update (3:27 p.m.): Morolake Akinosun’s comments on today’s events
On competing against two girls in the 100 meter prelims:
“It’s my home track, so I just took it as running at practice all the time on that same straightaway.”

On the 2 hour rain delay:
“Our team has handled it pretty well. We are fortunate enough to have our facilities here and we’ve stayed dry. We’ve done a really good job of communicating. I don’t think it’s impacted us at all really.”
— Leah Vann

Update (3:24 p.m.): Aldrich Bailey’s comments on today’s events:
“Today was pretty moderate, but tomorrow is going to be hectic. The men of Texas have not really been looked upon as doing a lot of really great things in the past couple of years. So, we’re in the mix for everything now. I remember when I was at A&M, it was just A&M and LSU, but now Texas is here. Texas is in the mix. Tomorrow we can show everybody what this University can provide.”
— Leah Vann

Junior Senoj-Jay Givans led the Longhorn crew with a time of 10.26 seconds to qualify for Saturday’s final in the No. 2 overall spot. Junior Charles Anumnu qualified in fifth, while junior Aldrich Bailey qualified in sixth. Tevin Hester of Clemson will go into the final with the top-seeded time of 10.22 seconds.

With much anticipation after the rain delay, senior Morolake Akinosun lead her heat as one of three runners to qualify for Saturday’s final with a top time of 11.25 seconds. Daniels dominated her heat with a time of 11.53 seconds, making the duo No. 1 and No. 2 going into Saturday’s finals.

The team of junior Charles Anumnu, junior Aldrich Bailey, senior Zack Bilderback, and junior Senoj-Jay Givans will advance to the finals with the first place qualifying time of 40.07s. LSU and Arkansas will advance with the No. 2 and No. 3 times.
— Leah Vann

Update (11:10 a.m.) Women qualify for finals in 4×100-meter relay
The team of freshman Teahna Daniels, senior Courtney Okolo, sophomore Shania Collins, and senior Morolake Akinosun opened the running events by taking first in their heat with the third place qualifying time of 44.45s. Akinosun will also appear in the 100-meter dash, 4×200-meter relay, and 4×400-meter relay in her final Texas Relays as a collegiate athlete.

“It’s so many emotions,” Akinosun said. “My whole family is here and it’s a lot of fun for me. It’s bittersweet.”
— Leah Vann

Update (9:33 a.m.) Delay
Texas Relays will be delayed 30 minutes or so, until the storm has passed.
— Leah Vann

Update (9:00 a.m.): The third day of Texas Relays puts the competition in full drive with various track and field events. Most of the track events will be preliminary races for finals either tonight or tomorrow. Field events include pole vault, triple jump, high jump, discus and javelin. Follow along here for updates throughout the day.
— Jacob Martella