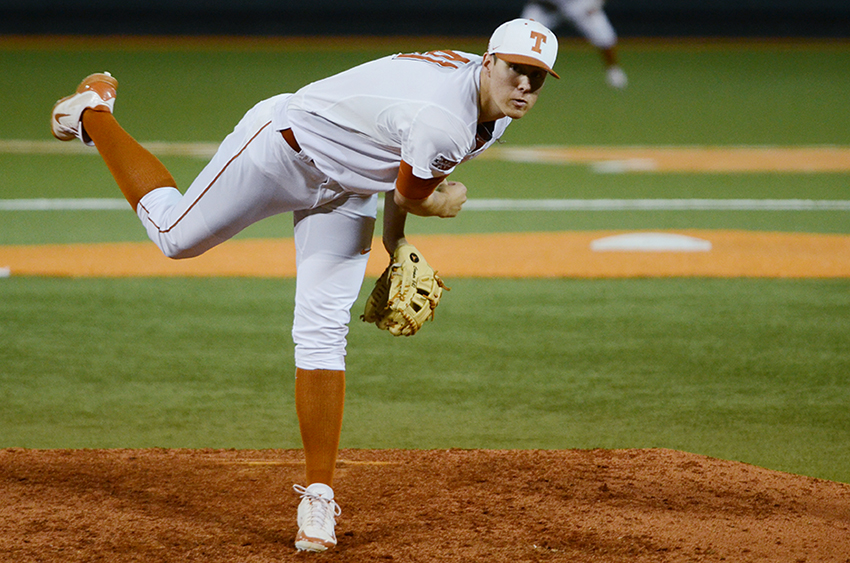 Three pitches were all it took to make Friday an unpleasant night for right-handed pitcher Morgan Cooper and the rest of the Longhorns.

Oklahoma cruised to a 6-1 victory over Texas in Norman, with all six of its runs coming off of three long balls.

Cooper managed to give some nasty downward snap to his curveball and notched seven strikeouts in his five innings of work, but from the first inning of the game, the redshirt sophomore was forced to pay for spotty fastball command.

With one out in the bottom of the first, the Sooners put men on second and third with a walk and a ground rule double. Cooper tried work his way out of the jam by slipping a fastball past first baseman Jack Flansburg, but the Sooner cleanup hitter was not fooled. Flansburg deposited the pitch well over the right field wall for a three-run homer.

That would be all the offense the Sooners would need.

Texas flashed some offensive life in the third inning when a Tres Barrera double on a hit and run play pushed freshman shortstop Kody Clemens across for a two out score.

That was the only semblance of a Texas rally for the rest of the game. The visiting Longhorns mustered just two hits in the rest of the contest and were unable to get ahold of Sooner right hander Chris Andristos.

The freshman tossed a career game, allowing five hits, no walks, and just one run over 7.2 innings of work.

Cooper matched his counterpart on the mound for most of the game, but the Sooners sent two high fastballs over the fence in the fourth inning to extend their lead to 6-1 and snuff the Texas morale.

Sophomore Eric Dunbar did a good job relieving Cooper, twirling three innings of no-hit ball, but the Texas offense was unable to put together any sustained rally to validate the right-hander’s strong performance on the bump.

Kody Clemens, who went 2-4 at the plate and scored the lone Texas run, was one of the few offensive bright spots for the Longhorns. But the shortstop countered his success with the bat by fumbling two routine outs in the sixth and seventh innings to add to the ever growing list of Longhorn fielding mishaps.