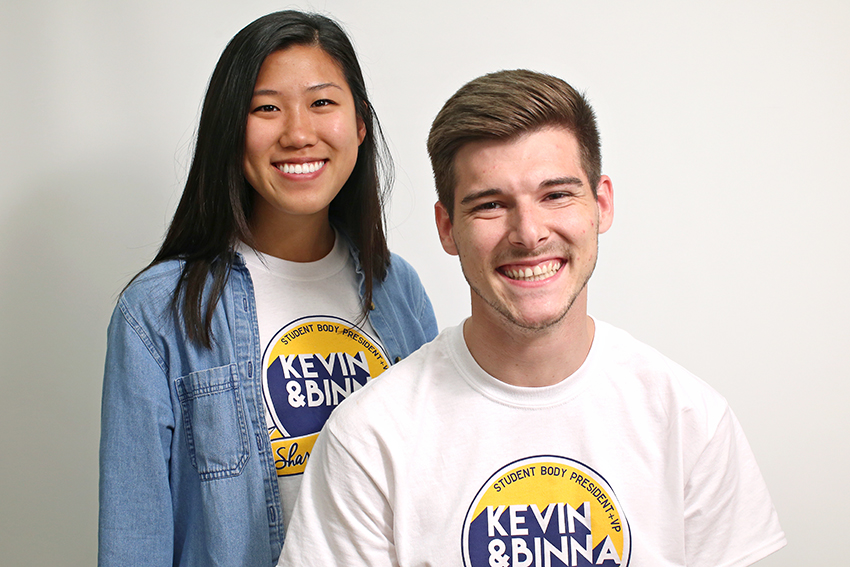 Student stories were at the heart of the Student Government (SG) president-elect and vice president-elect’s campaign, and now that the election is over they want to hear more stories to help them create change on campus next year.

After winning last week’s executive alliance runoff election by 2.06 percent, Kevin Helgren and Binna Kim said they are looking forward to appointing members of their executive board and meeting with administration to discuss their platform points.

Their goals include forming a working group of members from various organizations to address the issue of sexual assault, including Voices Against Violence and the Women’s Resource Agency, and raising awareness of the University’s existing mental health resources.

Helgren said their platform points were inspired by their own experiences as well as the stories people shared.

“Our platform points were the first thing we did, and that was intentional,” Helgren said. “We wanted to focus on the ‘why’ before the ‘how’ and the ‘what.’ We worked off the stories people shared about, and we sat down and talked about issues we ourselves are passionate about — for me it’s mental health, and for Binna it’s the issue of sexual assault.”

The team also hopes to promote culture change, especially in light of this year’s prolonged executive alliance race. Kim said she and Helgren plan to create an internal reformation committee to initiate change from within the organization.

“The committee will be composed of both SG veterans and those with no SG experience at all,” Kim said. “We want to combine seasoned perspectives with fresh perspectives, look at the things that aren’t working, and cut them out.”

Other platform points include helping transfer students feel at home at UT through a mentorship program, improving the affordability and availability of fitness programs during mid-terms and finals, and advocating for the expansion of gender-neutral bathrooms and the creation of gender-neutral housing options.

Helgren said he hopes their platform will grow throughout the year.

“With every conversation, we gain more insight into issues we may not have personal experience in,” Helgren said. “We hope to work toward that platform right off the bat, with much of the work taking place during the summer.”

Kim said they hope to make real change happen by cooperation and collaboration.

“It’s important to recognize that it’s not just me and Kevin,” Kim said. “We’ll be working with the whole executive board. If we have any big issues, we’ll communicate with our team and with the SG assembly. We want to be real, and we want to innovate by handling things differently than SG traditionally has in the past.”

Helgren said he and Kim will continue relying on storytelling — the major theme of their campaign — to address challenges and hope to provide avenues for students to express their needs.

“[Conversations] is a bit of a buzzword, but effective communication is important,” Helgren said. “I think we’re still wanting to empower the individual. We haven’t fleshed out the exact ways yet, but one idea is creating a monthly student speaker series — like TED talks by and for students.”

Helgren said that despite positive policy plans, the team expects to face challenges during the next year.

“Campaigning was difficult, but the most difficult part is yet to come,” Helgren said. “The fact that we’re anticipating challenges will help us deal with potential challenges well.”

Xavier Rotnofsky, emeritus student body president, said he will meet with Helgren and Kim this week to discuss their new roles.

“It’s always important to not make empty promises you can’t follow through with because it makes SG look unaccountable and rubs people the wrong way,” Rotnofsky said. “I think that’s always the challenge at first because you have expectations to maintain while also dealing with the mundane everyday work.”