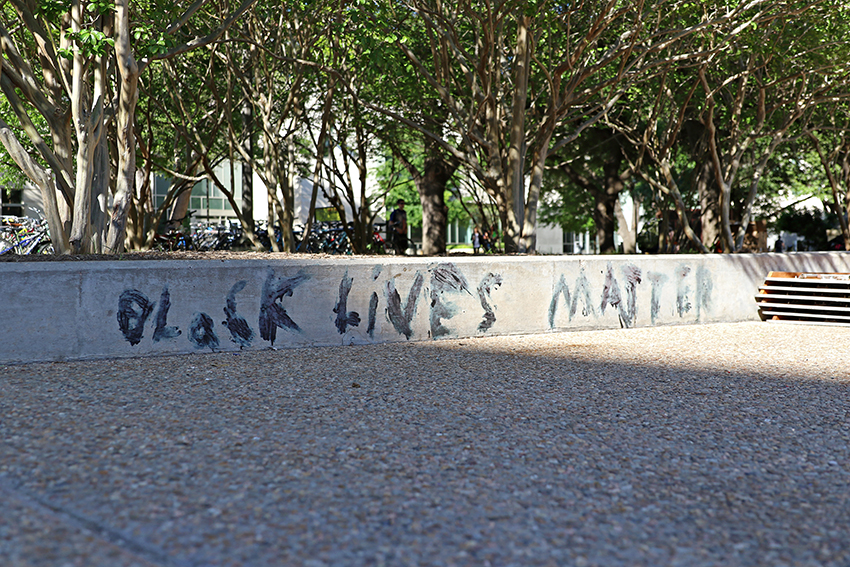 An area outside of Gregory Gymnasium was marked with graffiti Sunday night, making it the sixth incident in a string of similar events in which graffiti appeared on campus featuring the same message earlier this year.

The graffiti appeared on a concrete wall enclosing a bed of trees in front of the gym steps. The message “Black Lives Matter” was written in black paint.

There are five previous incidents this year of “Black Lives Matter” graffiti appearing on campus, such as on statues and a half wall in front of Homer Rainey Hall in February. It is not known if the graffiti outside Gregory is related to those in the February incidents.

UT spokesperson Cindy Posey said she did not have information about who was responsible for the graffiti but said the University is currently investigating the incident.

“I have notified UTPD, and UT facilities services is analyzing the situation,” Posey said.

Posey said there is a cost associated with graffiti removal, but exact figures will not be known until after investigation.

“It’s different with every incident,” Posey said. “Facilities has to analyze to find out what kind of paint it is and what material it is on. If it’s a statue, for example, it could be more expensive because the material is more valuable. Facilities will have to analyze what kind of process will be best to remove the graffiti.”

Posey said she does not know exactly when the graffiti will be removed but says UT Facilities will remove it as soon as possible.