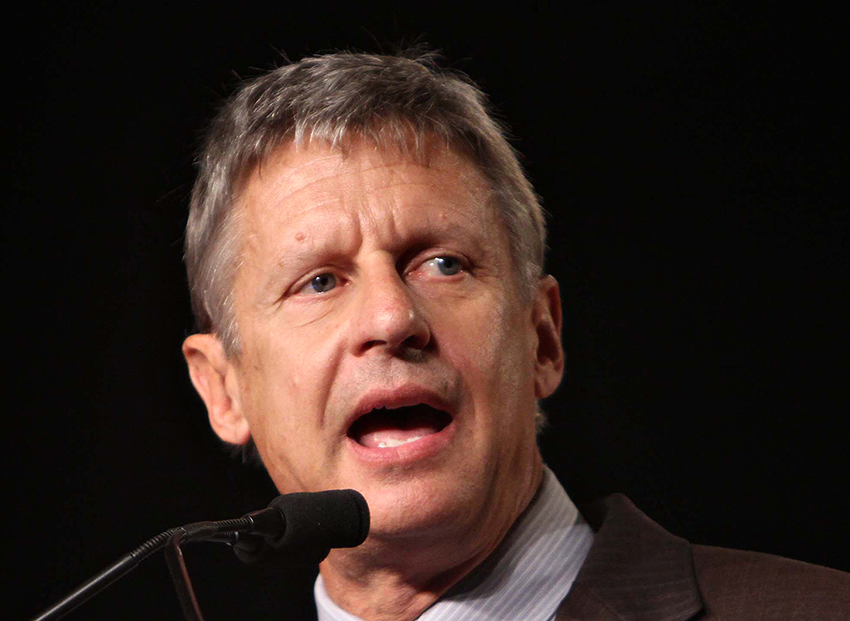 But why pick between the lesser of two evils when there’s another option — the public just wouldn’t know it because “there’s no way a third party wins the presidency without being in the debates,” said Gary Johnson in a CNN interview.

Johnson, former Republican governor of New Mexico and CEO of a legal marijuana company, is likely to be the Libertarian party’s candidate for president in 2016, just as he was in 2012.

In 2012, Johnson won over a million votes, 1 percent of the popular vote in the presidential race. And in 2016, Johnson could, and should, break his own record of running the most successful Libertarian party campaign of all time, as he’ll be on the ballot in all 50 states and D.C.

In a March 24 Monmouth University poll, a hypothetical presidential matchup between Trump, Clinton and Johnson resulted in a Clinton lead of 42 percent, Trump 34 percent, and Johnson 11 percent.

This 11 percent is notable for two reasons. The first being that in a favorability poll, only 24 percent of respondents knew enough about Johnson to form an opinion of him. So nearly half of the 24 percent who know of Johnson would pick the former governor.

And the Libertarian party may be on the rise. Fox Business Network aired a Libertarian Presidential Forum with Johnson, Austin Petersen, founder of “The Libertarian Republic,” and anti-virus software founder John McAfee.

For Johnson to progress from being on stage with Petersen and McAfee to being on stage with Trump and Clinton, he needs to poll at 15 percent to get up on stage (something the Libertarian and Green parties are suing over). If Johnson boosts his numbers and gets included in more polls, he very well could join the GOP and Democratic nominees on stage this summer.

So for those a part of the “Bernie or Bust” group, or voters who would rather not vote than have to decide between Clinton or Trump, consider Johnson — who has appeal to both conservatives and liberals.

Libertarians such as Johnson are essentially fiscally conservative and socially liberal. He opposes Obamacare and his tax plan means “the IRS as we know it today would no longer be necessary,” as written on his website. But he also supports a woman’s right to chose and wants to lower the drinking age, if not abolish it altogether.

So instead of picking between a racist and a crook, go vote and pick a pot-smoking former governor to be the next president of the United States.