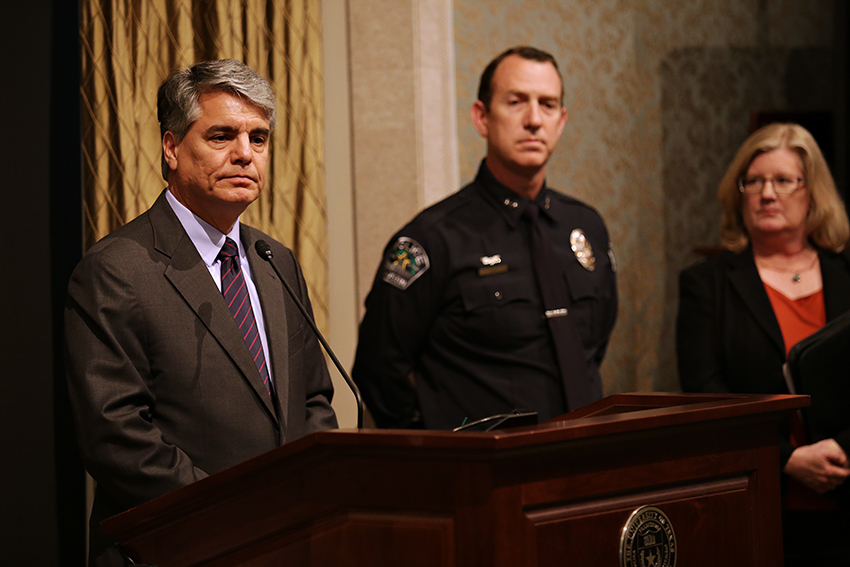 To read about the community gathering held Thursday evening in honor of Haruka Weiser, click here.

The Austin Police Department is seeking help from the UT community and the general public to help identify the suspect involved in the death of dance freshman Haruka Weiser.

Fenves said in the email sent to the UT community yesterday morning that Weiser was “liked and admired by her classmates and respected by professors for her intelligence and spirit,” and described her death as a “tragic loss” for the UT community.

“This is a tragic day for our University of Texas family as we mourn the loss of one of our own, Haruka Weiser, in a brutal murder,” Fenves said at yesterday’s press conference. “As a parent, this is my worst nightmare.”

APD, which is taking the lead on the investigation, described the suspect as a 6-foot-tall black male, but had no other identifying details at the time. It is not known if the suspect is a UT student, Gay said. $15,000 is being offered for any information leading to the identification and arrest of the perpetrator, and APD encourages people to use its tip line at 512-974-5372.

“We wish that we could have come out yesterday [with Haruka’s name], but we felt it was very important that Haruka’s family be notified,” Gay said.

A video taken by surveillance cameras showed the suspect walking Sunday night with a pink or red bicycle by the Darrell K Royal – Texas Memorial Stadium. Gay confirmed Weiser was assaulted, but officers are not releasing further information about the specifics of the assault at this time due to the ongoing nature of the investigation.

Bob Harkins, associate vice president for campus safety and security, said students should walk on well-lit paths and sidewalks in pairs at night, be aware of their surroundings and not take shortcuts while walking to their destination.

“I’m asking you not to walk distracted,” Harkins said. “In essence, do the smart things. Don’t do the expedient things.”

Gage Paine, vice president for student affairs, said counseling services are available during extended hours to all students. The Counseling and Mental Health Center will be open from 8 a.m.–7 p.m. until Friday, April 15, and additional hours will be held from 10 a.m. to 2 p.m. this Saturday, April 9.

Paine said counseling will be available to students regardless of whether they have an appointment scheduled.

“You’re not alone,” Paine said. “Please ask for help. We will take care of you.”

In a statement from Weiser’s family read by Fenves at the press conference, the family said they were grateful for the “outpouring of love” they have received. Weiser was a “passionate and dedicated dancer” and planned to pursue pre-medical studies in the future and visit family in Japan during the summer.

“Although Haruka loved to perform on stage she never sought the spotlight in her daily life,” her family wrote. “Perhaps the last thing she would want is to be the poster child for any cause. And yet, as we struggle to understand why she was killed, if her death can somehow make it safer for a young woman to walk home, if it will prevent another assault or murder, then at least we could find some meaning behind an otherwise senseless and tragic death.”