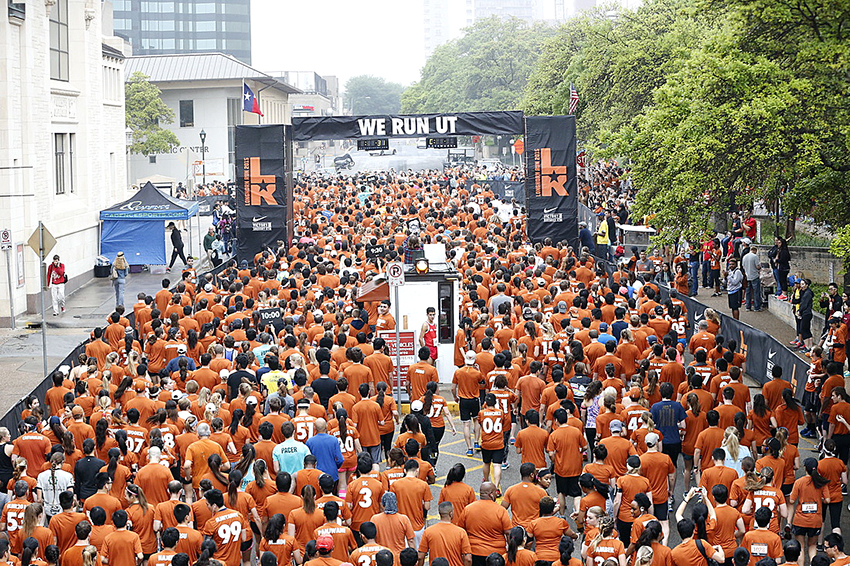 Participation in the Longhorn Run has increased 65 percent since 2012, and its sixth annual race this Saturday is on track to host over 4,000 runners.

Since its inception in 2010, the Longhorn Run has transformed year after year, said Alyssa Kahl, Longhorn Run director and biology senior. When Longhorn Run started tracking numbers in 2012, there were 2,180 participants. Last year, the race had 3,595 runners, according to data provided by the Longhorn Run committee.

Kahl, who has been on the committee for the last three years, said she began helping to plan the race when she was just a sophomore.

“It’s really been a great time,” Kahl said. “I have really seen the event grow a lot in these past years, which has been really cool.”

Kahl said the committee reached out this year to professors to organize classroom teams and it has been a success.

Government professor Sean Theriaulta leads the list with the most students enrolled for the race. According to Kahl, Theriault’s online government class has more than 300 students ready to run this weekend.

He doesn’t entice students to run for extra credit, but instead makes community engagement a requirement in the course where students are expected to attend 10 out of 13 events. This weekend, one of the opportunities is the
Longhorn Run.

“I think there are so many benefits to being physically fit, so I’m happy to build it into the class and I find it easy to justify it,” Theriault said.

Business professor Clint Tuttle will admit he previously hated running, but after getting involved in races and competing, he found an appreciation for the sport.

“Running is one of those things you hate at first, but then you get a hang of it and start to enjoy it,” Tuttle said.

Tuttle and several of his students will be running the race on Saturday. He said he likes to get his students involved because it’s a way to get to meet students outside of class.

“For this, there is no extra credit,” Tuttle said. “But since it’s something that will improve health, so I say they get extra credit for life.”

Brown said several student organizations will have entertainment throughout the course and the post race event will be in front of the Tower.

“We wanted to make it a massive event,” Brown said. “The tradition has grown tremendously and it’s something I’m most proud of.”

Kahl said the Longhorn Run brings the UT community together but also gives back to the University. Proceeds from race registration help the Student Government Excellence Fund and the RecSports Excellence Fund, which both give grants to student organizations.

“I think it’s a good race for students to get their first starting point for their first 5K or 10K, but it also gives them a chance to give back to their University, which is a really big aspect of the race.”