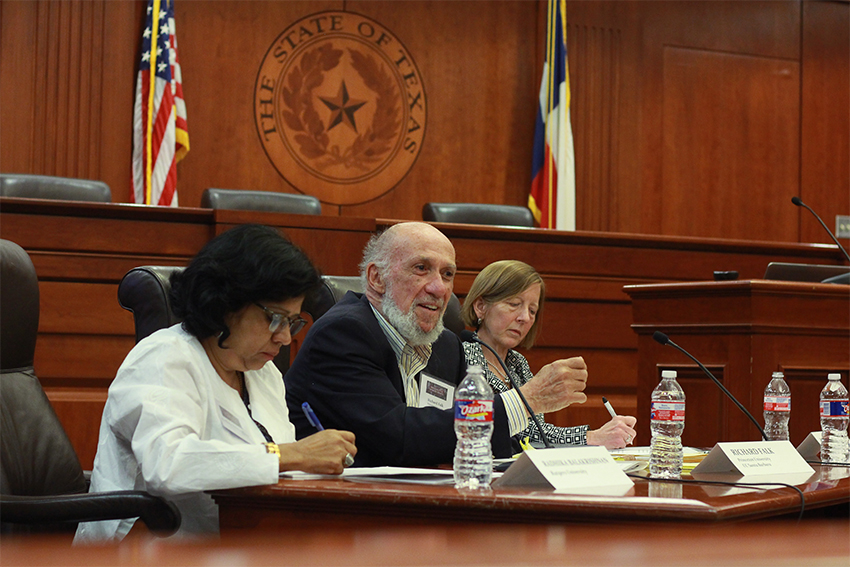 The Inequality and Human Rights Conference opened yesterday afternoon with a panel titled “What Do Human Rights Have to Do with Economic Inequality?” at the School of Law.

This is the 12th annual conference presented by the Bernard and Audre Rapoport Center for Human Rights and Justice, a campus organization created through the School of Law in 2004 to serve as a venue for the analysis and practice of human rights and social justice.

This year’s conference, which will conclude Saturday afternoon, consists of 11 different panels featuring scholars and legal practitioners from around the world.

The opening panel began with a welcome and introduction by Karen Engle, Rapoport Center founder and co-director, and Daniel Brinks, Rapoport Center co-director. Engle said the importance of the topic of the conference is evident in a phrase used by one of the individuals the center was named for.

“One of [Bernard’s] favorite statements was ‘when too few have too much, and too many have too little, we do not have a sustainable society,’” Engle said.

Four experts each gave brief opening remarks based on their own experiences and then discussed questions posed by the mediator and the audience. All the panelists agreed the issues of economic inequality and human rights are linked and should be considered further.

Jordan Auzenne, a political communications and radio-television-film freshman, said she attended the panel for a class focusing on apartheid in South Africa.

“When [the speakers] gave real-world examples of human rights and economic inequality intersecting, like the apartheid government, it was really interesting because we usually study those instances apart from economics,” Auzenne said. “It provided a lot of perspective on international human rights and how that’s affected by the economy.”

This year’s conference is the first in a series that falls under the Inequality and Human Rights Project, a five-year endeavor by the Rapoport Center to study and rethink the global human rights movement with emphasis on its relationship to economic inequality.

Conference attendance is free and open to the public. Co-founder Daniel Brinks said that by attending, people stand to gain a greater understanding of an issue that is gaining relevance.

“It’s increasingly obvious that, in this country in particular, the question of inequality has become central to our political discussions,” Brinks said. “What this conference has to offer is a series of insights about the role of inequality and structuring outcomes that has a global dimension as well as a U.S. dimension.”