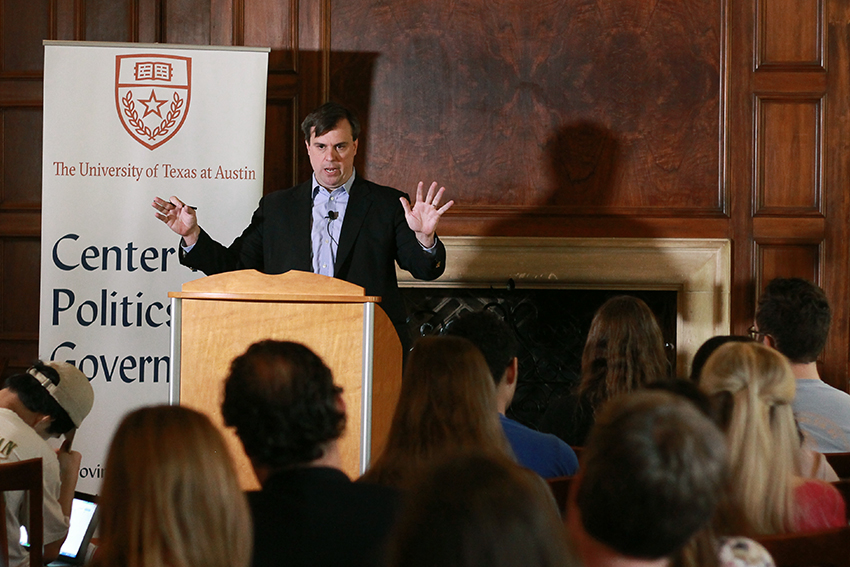 The UT Center for Politics and Governance hosted national political correspondent Jonathan Martin of The New York Times on Thursday to speak about the presidential election.

“This campaign is unprecedented, especially with Donald Trump defying gravity,” said Martin, who has also covered the previous two elections cycles. “People are more skeptical of establishment leaders and people are sour about the state of the country.”

Martin said this skepticism is seen in both parties. He said the resistance to Trump has not receded — it has solidified.

“Trump and [Bernie] Sanders both serve as a rejection of establishment politics,” Martin said. “Instead of unifying the party, Trump is saying things that has spooked Republicans,”

Trump keeps winning 35 to 37 percent of states’ voters, a statistic that has remained constant throughout the primaries.

“He is being met with deafening silence,” Martin said.

Trump has a 239 delegate lead and needs 59 percent more to win, Martin said.

Martin said Democrats expected the race to be over by now, with Clinton as the nominee, but Sanders has maintained a competitive campaign.

“It is difficult for Senator Sanders to overcome,” Martin said. “It is a very daunting lead.”

Democratic primaries are proportional — there are no winner-takes-all — and Sanders would have to win in almost landslides in all remaining states to beat [Clinton], according to Martin.

“It is hard to come back in proportional politics,” Martin said. “Its like being three touchdowns behind in the fourth quarter and having a wishbone defense.”

The rhetoric of Trump’s “tough talk” is appealing to to those who think this country is changing for the worst, Martin said.

“That message really goes straight to the heart of a lot of folks,” Martin said. “The issue is both economic and cultural, the heart and the head.”

Computer science and Spanish senior Tristan Nguyen said that Trump’s rhetoric is aimed at those who hold the same ideologies as him.

“It does seem very well-planned so he can rile a lot of people up who share the same beliefs as him,” Nguyen said.

Martin said it’s clear a lot of Trump’s answers on policy are off the cuff and improvisations.

“The abortion question comes to mind,” Martin said. “He clearly hadn’t thought that through.”

Maya Garcia, a political communication and government senior, said she believes Donald Trump’s colorful remarks are off the cuff, but that doesn’t mean they are not strategic.

“That’s his secret sauce,” Garcia said. “He knows it can’t really hurt him if he generally says something shocking. The strategy is chaos.”