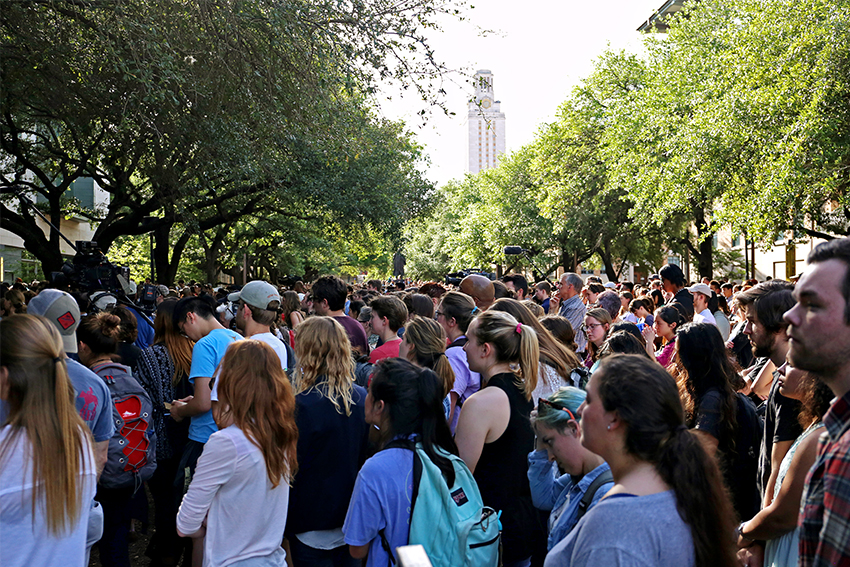 The theatre and dance department is a small community at UT, accepting very few students a year to its program.

But following the loss of one talented dancer, more than than 2,000 members of the UT community gathered on the East Mall to mourn the loss of dance freshman Haruka Weiser.

Brant Pope, chair of the department of theatre and dance, said the last several days the department had gathered together in the Winship Building as a community, hurting for the sudden loss of their student.

“There is so little to say. No one has the words that will work,” Pope said. “We are together as a community for Haruka and for ourselves. We gather because life is precious, — Haruka was precious, and precious to us.”

As Pope read an emotional poem about grieving by Christina Rossetti at the vigil, students in burnt orange theatre and dance shirts wept.

“Remember me when I am gone away, gone far away into the silent land,” Pope read. “When you can no more hold me by the hand.”

But amid the tears, many students laughed at stories of Weiser’s recruitment to Texas’ theatre department.

Much like a coach wanting to get an all-star quarterback, Charles Anderson, the program head of dance, admits he and his UT colleague eagerly wanted to recruit Weiser after seeing her dance at a national high school dance festival.

“We immediately turned to each other and said ‘Her — we have to have her,’” Anderson said. “We spent the remainder of that year like football coaches trying to get her to come here.”

The University dimmed the usually bright UT tower to its special darkened configuration in honor of Weiser’s memory. The tower darkened after the community gathering ended.

“Haruka’s attitude is something that we as Longhorns can, and should, strive for,” Helgren said. “Think about your own interests, your own passions. Think as far as back your childhood, or as recently as what you spent this afternoon doing. Think about what — for you — does what dance did for Haruka.”

Rachel Osterloh, president of Senate of College Councils and senior government student, helped organize the vigil with the Fine Arts Council and Student Government. Osterloh said the legislative student organizations found it important to give students a supportive environment to reflect and remember Weiser.

“We didn’t want anyone to feel alone,” Osterloh said. “It’s our moral responsibility as legislative student organizations to provide a community that was appropriate and helpful for the general student population.”

Yanelis Garcia, dean of students squad leader and public relations senior, said she felt the UT community was a family this evening.

“I felt the Eyes of Texas were upon us because the turnout was incredible,” Garcia said. “Since I was a freshman, I have been taught we are a family.”

Fine arts students paid respects to Weiser through their most natural way — dance.

With tears in their eyes and audible weeps between their breaths, students said goodbye to their classmate with a dance gesture done typically at the end of practices.

To read about the most recent updates to the homicide investigation, click here.