Twins Charles and Carlton Anumnu are competitive on, off the track 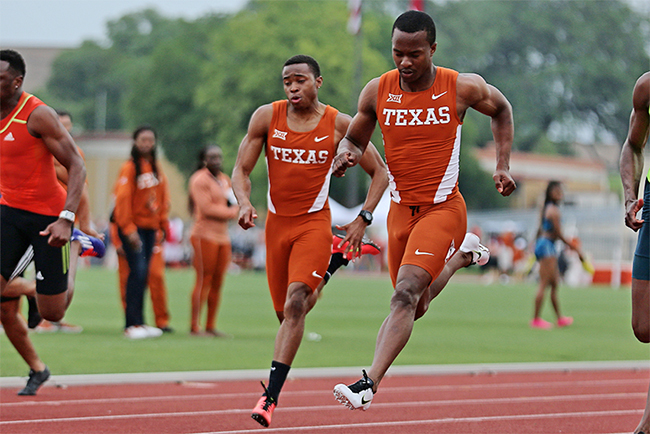 Before their frequent visits to Subway, the duo started out as trying to be the fastest on the playground as kids. Now, the junior twins race for larger crowds than the local schoolchildren.

The duo from Stafford, Texas dominated the high school track scene, winning the 3A state championship in the 4×100-meter and 4×200-meter relays during their junior year. Their path was always to Texas.

“Regardless of track or not, we would’ve been at UT,” Charles said.

Their competitiveness followed them to Austin. High school coaches had to separate them during practice workouts, fearing that they would hurt themselves from working too hard. To this day, nothing has changed.

“They decided to race 50 meters one time, and Charles almost pulled his hamstring,” junior Byron Robinson said. “That was pretty funny looking back on it, but at the time we were worried.”

The two are hard to tell apart — one of their weight trainers didn’t know he had been training two different brothers for a year.

“He just found out I was a twin yesterday, and we’ve been training with him since freshman year,” Carlton said.

However, unlike in high school, the two now run different races. During a 45-second running drill in the fall of freshman year, Carlton showed he was meant for the 400-meter after almost completing a full lap. Coaches decided to put him in the event, where he ran a 46.7.

Charles is a member of the 4×100-meter relay in addition to running the 100-meter and 200-meter. Carlton knew from high school that Charles was a better 100-meter runner than he was.

“One time in summer track, my brother made it to finals in the 100-meter and I didn’t, but he felt like I could do better in the 100-meter, so I ran it and no one noticed,” Charles said. “He probably kept the medal.”

“I personally don’t even think we look alike,” Charles said. “My brother has a different haircut than me. I’m also more outgoing.”

The two have made impacts in races this season, and head coach Mario Sategna said he sees potential in them as leaders.

“They were disappointed after last year’s regional meet, because they weren’t going to advance in an individual event,” Sategna said. “I think now they have realized they are more than utility guys on relays.”