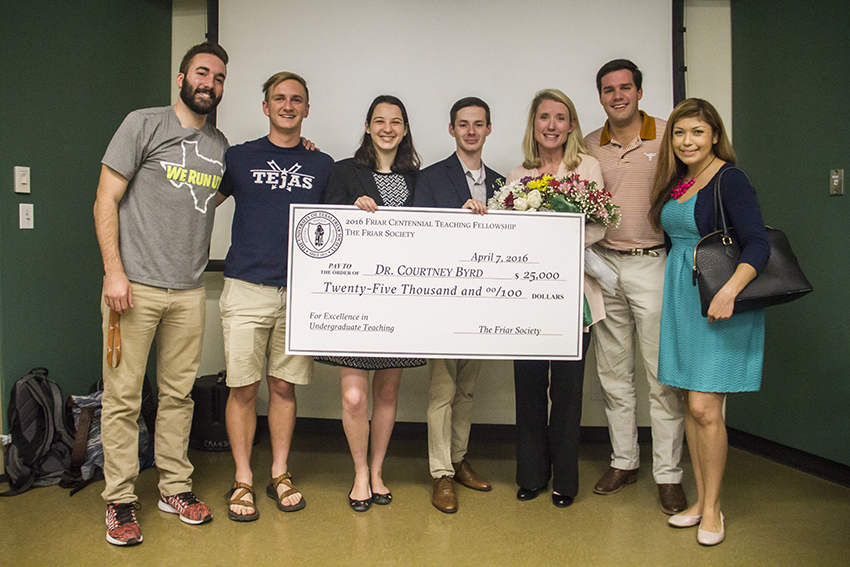 Courtesy of The Friar Society

The Friar Centennial Teaching Fellowship is a $25,000 award given annually by the The Friar Society, the oldest student honor society on campus. It is based on a combination of the professor’s past works, distinction in teaching, outstanding contributions to the University and student recommendations.

“Receiving this award was honestly surreal, it was overwhelming,” Byrd said. “I feel like I fall short so often, and I’m so grateful for this recognition. And I won’t take this for granted, I’ll keep working hard to help students as best I can.”

Members of the Friar Society, former students, Byrd’s family and an accompanying trumpet player surprised her during class to present the award, along with balloons and flowers.

Byrd said a key focus of her teaching is engaging students with experiential learning.

“I try to get my students involved in the process of translating theory to practice,” Byrd said. “I think that instilling in them at an early stage the connection between the lab and critical practice is critical. Every student I have has in some way changed my life for the better, and I hope that I can offer the same for each of them.”

In addition to teaching, Byrd is known for her research and work as the founding director of the Michael and Tami Lang Stuttering Institute on UT’s campus, an organization that supports individuals who stutter and their families.

“Dr. Byrd runs the stuttering institute, she’s given so much to this University, and she’s also an incredible teacher,” Enrione said. “She runs the institute pro bono as a director, she’s created a summer camp for kids who stutter, and kids fly in from around the world to attend this camp. She’s just incredible in every way.”

Robyn Croft, a communications sciences and disorders senior and the student who nominated Byrd, said it was an easy choice.

“She has impacted my life in a way that no other professor has,” Croft said. “She’s inspired me to pursue the field of speech language pathology, to push myself and set big goals, and she’s giving me the tools every day to reach those goals. So when I learned about this award, she was naturally the first person to came to my mind.”