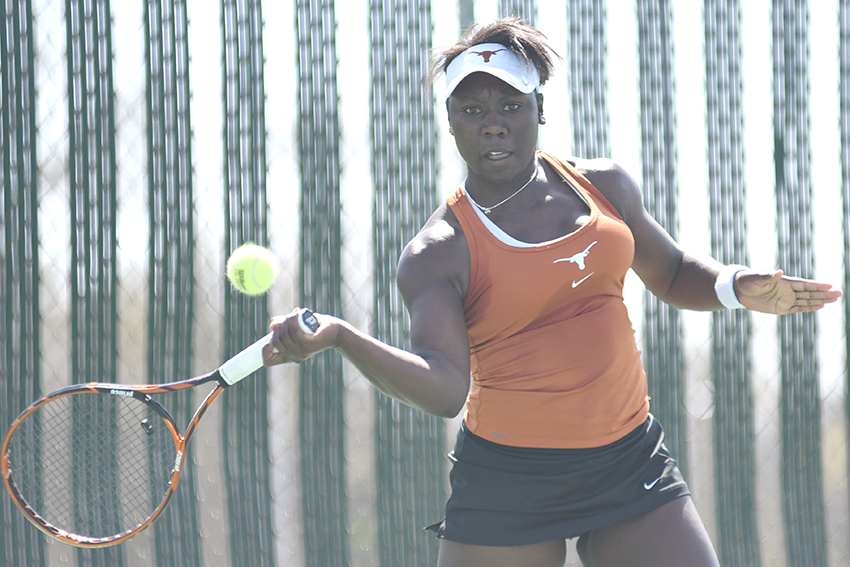 Despite a sluggish start to the day, Texas came back to take down No. 28 Texas Christian University 4-3 in Fort Worth on Sunday afternoon.

The Longhorns started off by losing the doubles point after the Horned Frogs’ 34th-ranked tandem of junior Seda Arantekin and redshirt junior Caroline Wegner took down 11th-ranked Longhorn duo senior Breaunna Addison and sophomore Dani Wagland at first position. The duo had been undefeated since February when they lost to Duke’s No. 19 tandem.

“I’d like to think that the level of tennis had everything to do with our inability to practice due to weather and the change in altitude from our match at Tech,” head coach Howard Joffe said.

The Horned Frogs’ momentum kept rolling with a win at fifth singles. Addison, this week’s Big 12 player of the week, tried to stifle their progress by knocking off freshman Marie Norris 6-2, 6-4 at first singles. TCU junior Olaya Garrido-Rivas responded with a victory over Texas freshman Katie Poluta at fourth singles.

Texas senior Lana Groenvynck started off the comeback run at sixth singles after a 6-2, 7-5 defeat over sophomore Alexis Pereira. Junior Neda Koprcina followed suit at second position overpowering TCU’s Wegner, and Wagland finished it off with a three-set match win, 6-3, 4-6 and 6-2, over Arantekin at third singles.

“I give our ladies all the credit in the world for hanging tough and finding ways to win while battling,” Joffe said.

After this weekend’s matches, Texas is now 4–2 in conference play, beating No. 12 Texas Tech on Friday to start the weekend off.

The Longhorns have three matches left before postseason activity begins. They continue Big 12 play this weekend where they’ll host West Virginia and Iowa State on Saturday and Sunday at Whitaker Courts.