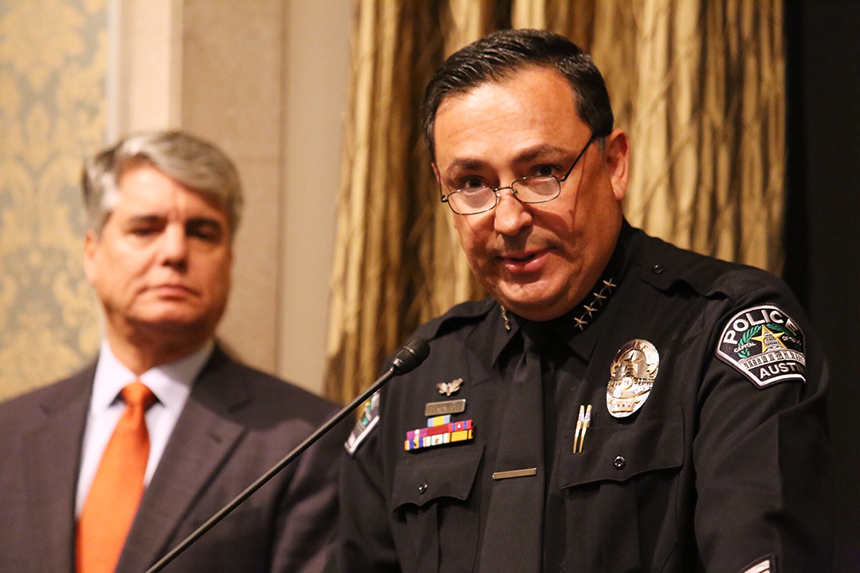 According to an arrest affidavit released Friday afternoon, Weiser’s murder is classified as a first-degree felony. Austin Police Department Chief Art Acevedo said an unidentified female recognized the potential suspect in the video released by APD Thursday as the same man involved in starting a fire she reported to law enforcement Monday afternoon in the 2900 block of Medical Arts.

“We are very certain the suspect we have in custody is responsible for the death of this beautiful young woman,” Acevedo said during a press conference Friday morning. “We’re going to bring justice to that family and restore the sense of safety this community has always enjoyed.”

According to the affidavit, surveillance video shows the suspect carrying a “shiny rigid object” and following Weiser across the bridge and onto the sidewalk behind the alumni center at approximately 9:38 p.m. Sunday night. The suspect was not seen on surveillance footage again until 11:47 p.m.

The suspect also carried a small duffle bag in the later footage that he did not have earlier, according to the affidavit. Weiser’s friend identified the bag as the one she was carrying when she left the F. Loren Winship Drama Building on Sunday night.

Criner was detained for tampering with evidence after a detective found a burned notebook filled with college-level coursework, a black jacket, a Doc Marten shoe and a MacBook marked with a Portland sticker that her family previously confirmed was on her laptop, according to the affidavit.

There hasn’t been a homicide on the UT campus since 1966 — the UT Tower shooting — Acevedo said. Acevedo said the police do not know the motive of the suspect and are looking into his criminal background.

According to a story published on Dec. 17, 2014 in the Tiger Times, Criner’s high school paper at Texas High School in Texarkana, Criner said he had been bullied from a young age.

In the article, Criner talks about being a victim of physical violence and growing up without his parents, but said he was determined to “take a different path” and help others.

“Our students expect to be safe,” Fenves said during the press conference. “We are taking measures and doing everything we can to improve the safety of the campus.”

UTPD Police Chief David Carter said the department will not only be patrolling the UT campus itself, but also the surrounding areas such as West Campus. Carter said the police will be taking a holistic approach to bringing increased measures of safety to campus and stressed the importance of partnerships between law enforcement agencies.

“UTPD’s motto is protecting those who will change the world,” Carter said during the press conference. “We believe this is a safe campus. However, this tragic incident has us redoubling our efforts.”

APD Detective Anthony Nelson, who served the lead investigator on the case and was the affiant, said in the affidavit that witness statements and physical evidence provide probable cause that Criner “knowingly and intentionally” killed Weiser, leading to the murder charge.

Criner is booked in the Travis County Jail with a bond set at $1 million.

A GiveForward page has been set up in memory of Haruka Weiser, with all donations going to the Weiser family.