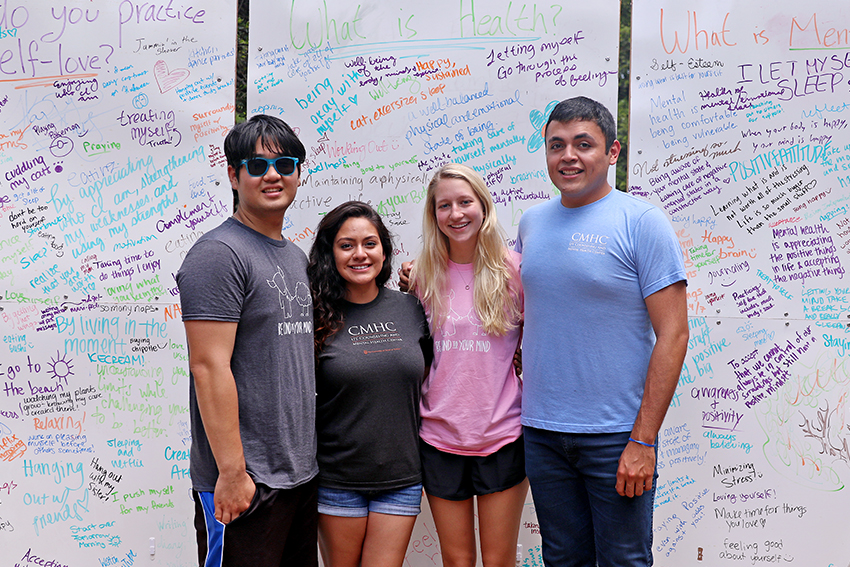 Glow-in-the-dark yoga and an adult coloring session are just some of the many activities offered by the Counseling and Mental Health Center during its inaugural Mental Health Promotion Week, which seeks to help students dealing with mental health issues.

The event kicked off with an interactive activity called “Leave Your Mark,” win which students wrote their thoughts on mental health on a big whiteboard in the East Mall. Students who participated and liked the counseling center page on various social media platforms received a T-shirt, stress ball or a sticker promoting the campaign.

Kelsey Lammy, mental health promotion coordinator for the CMHC, said the stigma around mental health makes it difficult for people to have serious conversations.

“If someone breaks a bone we think, ‘Oh, you should probably go to the doctor,’ [but] with mental health, it can be harder for students or for anyone to talk about what they’re going through,” Lammy said. “We know that community, social connectedness and talking to others is so beneficial. … College can be really exciting, but it can also be really stressful, so providing a space for students to start that conversation is so important.”

Rhetoric and writing junior Tori Steffan, who stopped by the CMHC booth yesterday, said she is happy to see the counseling center making an effort to help students.

“[Mental health] affects a lot of people in varying degrees,” Steffan said. “For myself, personally, my own struggles with mental health issues have impacted my stay here at UT, so I really like to see them having a lot of resources readily available for students. I felt I was able to seek [these resources] out when I first came here, but I’m glad they’re making it more well known and more accessible.”

Gustavo Molinar, psychology junior, proposed Mental Health Promotion Week to the CMHC. Molinar worked as a peer educator for the center from 2014–2015 and initiated the idea after working on another campaign during Suicide Prevention Week. Molinar said this type of campaign is important because of the hectic lifestyles students lead.

“The college student experience is one that encompasses more than studying,” Molinar said in an email. “There are many factors such as friends, stress, and [academic] pressures that can affect mental health. Students should understand that everyone has a different college experience, that they are all doing the best that they can.”