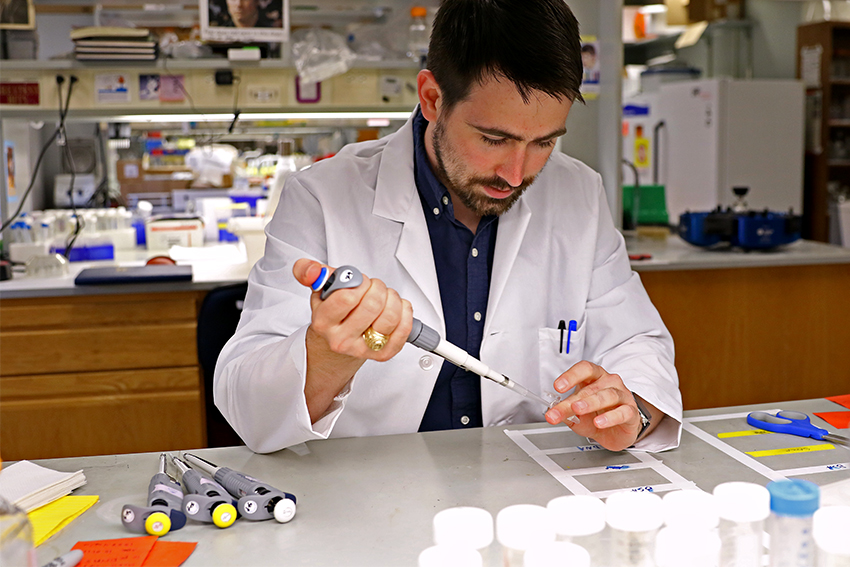 A closer look at the individual proteins that repair living cells could provide clues for defeating cancer, according to UT research scientist Ilya Finkelstein.

External causes, such as UV light, or routine mistakes in replication, often damage DNA. Exo1’s job is to destroy part of the injured DNA so that it can reattach correctly, similar to how a wire-stripper clips the end of a wire in order to put it back together, Finkelstein said.

The Finkelstein Lab found that RPA regulates how much DNA Exo1 is allowed to chew up. RPA works against Exo1 and eventually pushes it off the DNA.

“We believe this is a very important regulatory mechanism by which the cell can say, ‘Hey, we don’t know if this is the right kind of damage for you to be on, so you need to leave,’” said Logan Myler, a graduate student working in the Finkelstein Lab.

When a cell’s repair mechanism fails, the error usually kills the cell. Occasionally, however, a malfunction with Exo1 and RPA can cause damage to the cell’s genome and turn it into a cancerous cell.

Understanding the relationship between Exo1 and RPA, especially in cancerous cells, can give pharmaceutical chemists a way to target each cell and turn its own repair process against itself, according to Finkelstein.

“If there existed drugs that could target the Exo1-RPA interaction and perhaps break that interaction, that could potentially turn Exo1 into a real wood-chipper,” he said. “You really want to know what are the key players, what are their interactions, and how we can go after the most important druggable target.”

Single-molecule imaging gives scientists a better understanding of how exactly these key players function. Traditional cell biology focuses more on trying to understand the average behavior of the cell parts, according to UCSF research scientist Sy Redding who researched a single-molecule imaging technique called DNA curtains with Finkelstein during his postdoctoral research at Columbia University.

The Finkelstein Lab uses this DNA curtains technique, where strands of DNA line up against a microscopic metal barrier. This line-up allows scientists to see interactions between DNA and other molecules in thousands of samples at a time.

“Instead of just seeing the average behavior, you see all of the individual behaviors that make up the global average,” Redding said. “You get the chance to sample so much of the distribution.”

Finkelstein said one of the goals in his lab is to bring scientists from different fields together to solve difficult problems, such as how to use DNA curtains to view and understand these molecular interactions between Exo1 and RPA.

“We’re really trying to bring disciplines together in order to address these hard-to-answer questions,” Myler said. “When scientists are stuck in one field, it can be difficult to answer certain types of questions.”

The research into the process of DNA repair has highlighted this collaboration between different scientific disciplines.

“I think the breakthroughs of modern biology are driven by approaches and methods that are at the interface of different disciplines,” he said. “And that’s where the excitement really is, at least for me.”