Longhorns bats must come alive as season winds down 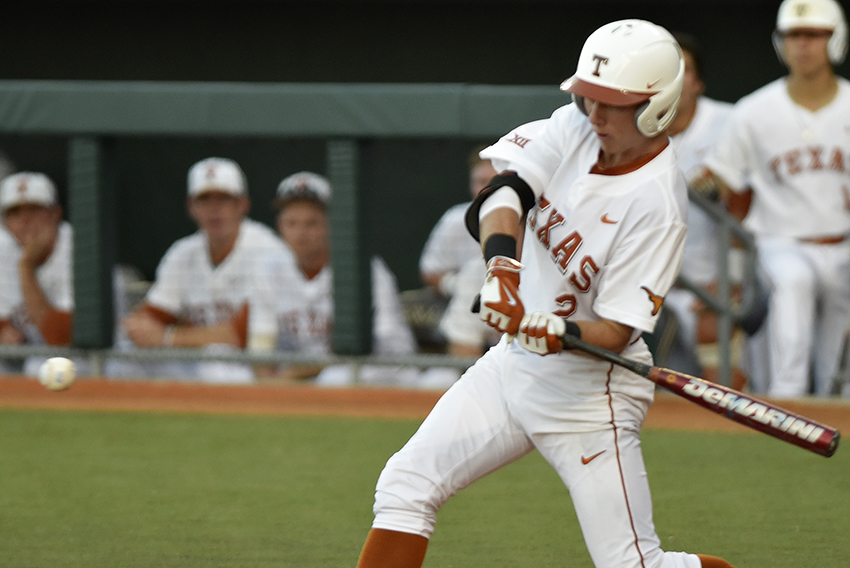 Augie Garrido stressed optimism on Wednesday as he addressed the media before team practice. The Longhorns had returned to Austin after midnight the night before, unloading off the bus after falling to Houston 3-2 in Sugar Land. Despite dropping two or more consecutive games for the fifth time this season, the Longhorns’ leader has remained upbeat.

“We’re in third place right now in the conference,” Garrido said. “If we beat those teams out ahead of us, we’ll really put ourselves in position to win the conference outright or enter the tournament with a higher seed.”

Yes, the Longhorns occupy a space near the top of the Big 12. But the ranking is a mirage, driven by small sample size. Nearly every other metric besides conference rank places Texas near the Big 12’s cellar.

Offensively, the Longhorns rank seventh of nine teams in batting average, RBIs and runs. And in the field, Texas leads the conference with 44 errors to go along with the third-worst
fielding percentage.

“We didn’t catch the ball as well as we could have,” associate head coach Skip Johnson said. “Our pitchers need to know they’re good enough to get four outs. That guy behind you may make a great play for you, or he may kick a ball for you.”

But since adjusting their infield in late March, the Longhorns have been significantly better behind the mound. Freshman shortstop Kody Clemens has provided stability up the middle, going eleven consecutive games without an error midway through the year.

With the defense solidified, Texas seemed primed to claw its way back to the .500 mark. But as one issue was solved, another emerged. The Longhorns offense has proved punchless of late, and aside from a 12-run outburst on April 9, Texas has averaged under three runs per game in its last eight contests.

There have been signs of life in the Texas attack, whether it be Zane Gurwitz’s six RBI barrage against Kansas State or Patrick Mathis’ team-leading five homers. But the sparks have failed to create a consistent offensive attack. First baseman Kacy Clemens commented on the Longhorns’ need to have multiple players get hot at one time.

“It would be nice if all of us could go off in one night,” Clemens said. “Hopefully we’ll start stringing hits together this weekend and put some runs on the board.”

Texas now sits at 14–19 with 19 games left in its regular-season slate. Garrido’s squad currently holds its worst all-time record through 33 games, far from what many predicted before the season began nearly two months ago. The clock is ticking for the Longhorns. And if they want to play meaningful postseason baseball, their bats must come alive sooner rather than later.