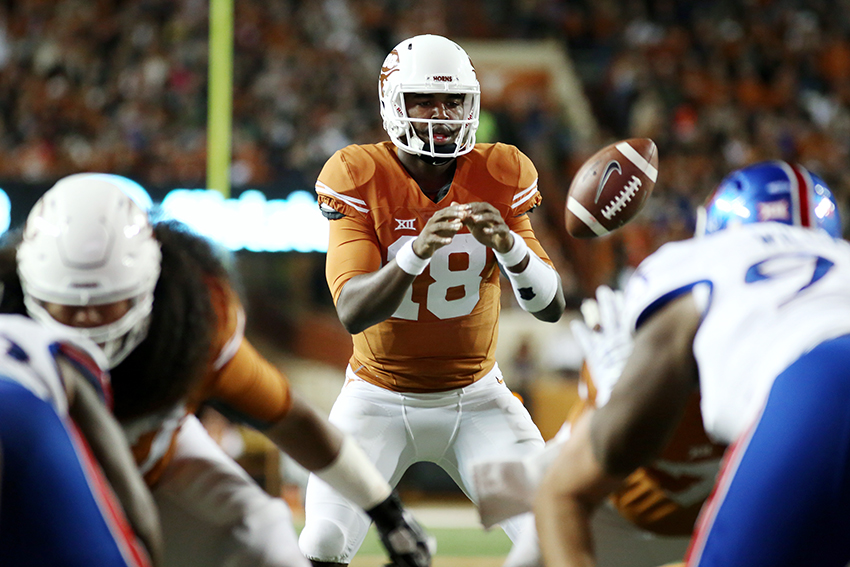 In any offense, the players who receive the most recognition are the ones who make the diving catches, throw the perfect spirals or rush for touchdowns.

But in new offensive coordinator Sterlin Gilbert’s fast-paced offense, it’s the offensive linemen that are the heroes.

“Those guys have been great,” Gilbert said. “What we do up front, we’ve got a physicality to us. Those guys set the tone for us tempo-wise and physicality-wise, and they’ve done a great job.”

Sophomore offensive linemen Connor Williams and Patrick Vahe were both selected to the Freshman All-American team following the 2015 season. But even after receiving such recognition after their first season in burnt orange, they aren’t satisfied with the results.

They just want to win.

The ultimate compliment for any offensive lineman is to never hear his name called by a referee. The anonymity ensures he is doing his part for the offense to succeed.

In order to assist the new up-tempo offense, the offensive line has made numerous adjustments to match the quickness and intensity of Gilbert’s attack.

“We look a lot better and a lot faster,” Williams said. “We are really moving the ball against a good defense.”

Under the conditioning of Gilbert and new offensive line coach Matt Mattox, the pieces to the offensive line’s puzzle are slowly coming together to form a solid foundation up front.

“The camaraderie of the team is coming together,” Williams said. “We’re really excited for what we are going to do this season.”

The bond formed between the Longhorn offensive linemen is unlike any other, and they believe they have what it takes to be something special.

“We are all a brotherhood,” Vahe said. “That’s the main thing. We all take care of each other position wise and when whenever one messes up, we’re all there to make sure he doesn’t mess up again.”

With a season of collegiate football under their belt, Williams and Vahe are considered the veterans on a very young offensive line. They know the key to success in this offense is sticking together.

“Just being able to come in and be prepared for whatever comes their way,” Vahe said. “Whenever you play this game you got to be physical, have a strong mentality, and also you have to make sure you play as a family, not [just] as a team.”