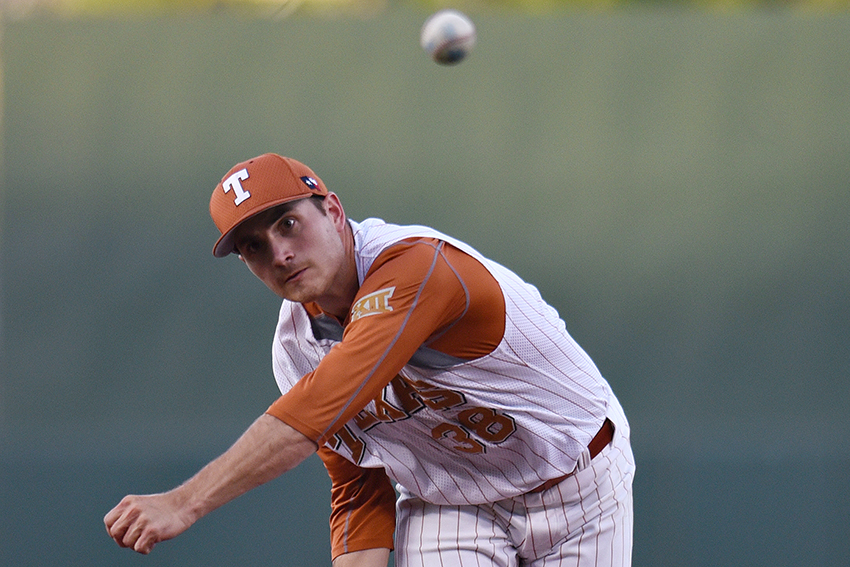 Skip Johnson wasn’t in any hurry.

As the Texas associate head coach trotted out of the dugout to the pitcher’s mound on Tuesday night, he didn’t want to impart any magical words of wisdom. He simply wanted to calm his pitcher down.

“You come into a stadium with 5,000 people, the expectation level is very high and the pressure is very high,” Johnson said. “So you try to work where [the pitcher] can understand the situation and go back to being consistent.”

Johnson has taken countless trips to the mound in his time as Texas’ pitching coach, beginning in 2007. The situations may vary, but the message in Johnson’s thick Texas accent stays the same: Focus on the pitch at hand and throw strikes.

The messaging began when Johnson was at Navarro College in Corsicana. Johnson won 450 games with the Bulldogs, making the Junior College Athletic Association Regional Tournament 13 times. But while the victories were important, Johnson noted a distinct difference between the mindset in Corsicana versus Austin.

“That’s the hardest thing at the University of Texas, you have to win every game,” Johnson said. “You can’t just throw a guy out there and have him develop on the fly like you can at a smaller school like Navarro.”

Despite the intense atmosphere, development is the driving force behind Johnson’s philosophy. Johnson plays the long game with the Longhorns pitching staff, sacrificing short-term struggles for long-term success.

Take Texas senior Ty Culbreth. Culbreth came to Austin in 2013 as a wiry pitcher, unsuited to throw significant innings at the collegiate level. After appearing in just six games as a freshman, Culbreth embraced a greater role in the bullpen for the entirety of his sophomore season as well as most of his junior year.

Culbreth was comfortable receiving the ball in late-inning situations, but was needed in the starting role near the end of the 2015 season. And after nearly three years of development, Culbreth delivered. The former-specialty reliever transformed into a reliable piece of Texas’ staff, winning four games with a 3.95 ERA. His finest moment came on May 21, throwing nine innings in Texas’ 4-3 victory over Baylor in the Big 12 tournament. Head coach Augie Garrido noted Culbreth’s development after the victory.

“Our pitchers stayed within the framework of the process itself and didn’t worry about the result,” Garrido said. “It takes maturity to be able to get to that point.”

Just as he did with Culbreth, Johnson is taking an expansive view on the Longhorns current crop of pitchers. Despite a 14–19 record heading into this weekend’s series with Kansas — beginning with a doubleheader on Friday at 4 p.m. — Johnson is optimistic in his staff’s ability to finish the year strong.

“There’s a lot of talent in this group,” Johnson said. “They just need to focus on doing the right things, learn how to compete and deal with adversity.”

And when that adversity does arise, Johnson will take his customary trip to the mound. But don’t expect him to be in a hurry.