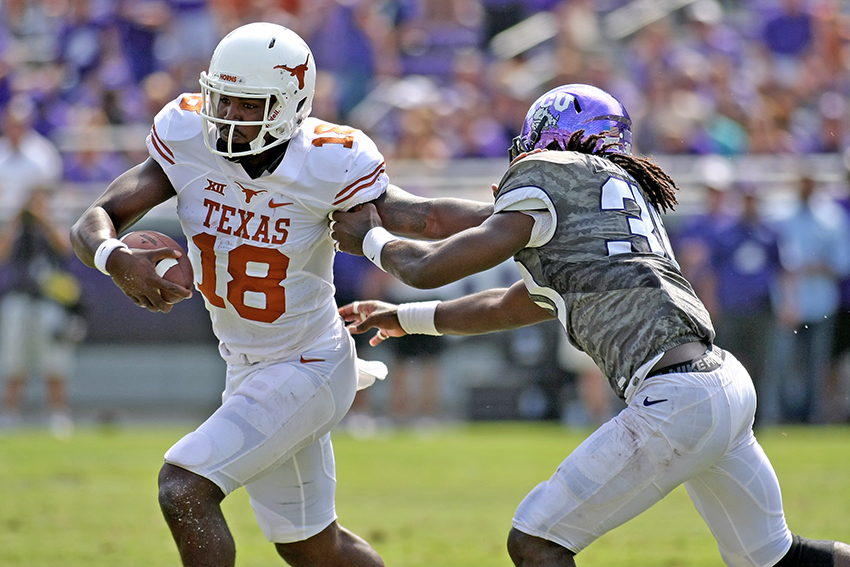 In just the last six seasons, Texas has started five different quarterbacks. This season could promise yet another change.

With Saturday’s orange-white spring game quickly approaching, redshirt sophomore Jerrod Heard has already sat out the majority of spring practice with a throwing-shoulder injury. He started 10 games for the Longhorns last season.

In Texas’ 5-7 2015 campaign, quarterback performance stood out once again as needing improvement. Beyond the position, the Longhorns’ team offense has struggled as well, finishing No. 8 in the Big 12 in yards per game and points per game.

“We have the numbers there,” head coach Charlie Strong said. “It’s about who’s going to really step up and be that guy… If we feel like he can take us where we need to get to, we could play a true freshman at quarterback.”

“The offense is way more simple, because it’s so fast,” offensive lineman Kent Perkins said. “You can’t have something too complicated.”

Though Swoopes boasts more experience than Buechele, the latter has greater long-term potential as a freshman. Longhorn fans will get a good look at both quarterbacks in the spring game.

Perhaps even more important than the question of who will start at quarterback is how both the offense and defense will handle the new offense.

“I think [fans] are going to see an improved team,” offensive lineman Connor Williams said. “We look a lot better and a lot faster. We’re really moving the ball against a very good defense.”

Gilbert’s new up-tempo offense has been the talk of spring practice. For Texas, the players know that this change may be the best way to compete in a deep Big 12 conference. While Baylor, Texas Tech and TCU finished as the top three in yards per game last season, Texas finished No. 92 nationally.

“I was excited [about the up-tempo],” Perkins said. “I know how much success Baylor has had with it. Last year we didn’t get to go to a bowl game and that hit us hard. We just want to win. However we get there, we get there.”