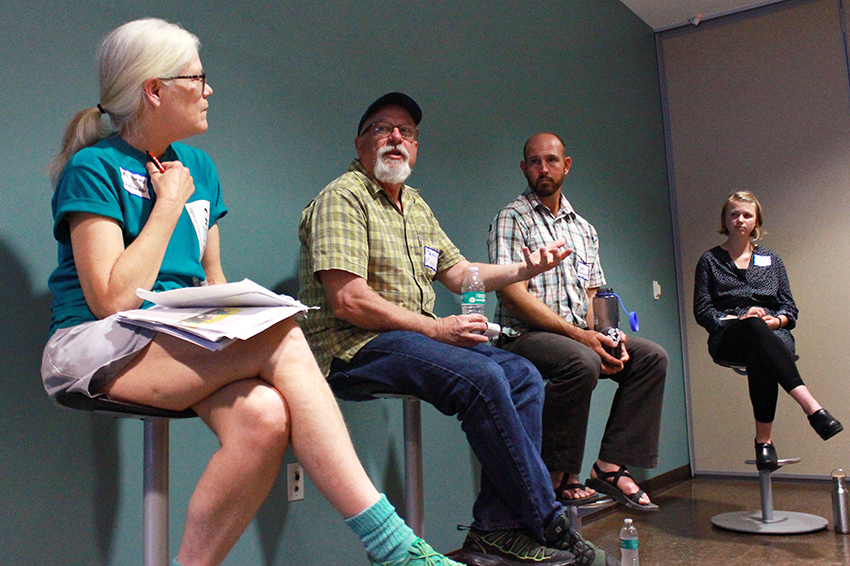 Mac McKaskle spoke through the choking and tears in his eyes as he recalled last summer, when synthetic marijuana, or K2, had swept throughout the Drag and deep into the homeless communities throughout West Campus, leading many of the street youth he knew and cared for toward a path of addiction.

McKaskle is currently a leader of Micah 6, an organization near campus dedicated to helping homeless youth, has only seen his drive for social justice issues increase whenever he sees his friends and family fall into addiction or mental issues.

“These young people… are not travelers from around the country who just showed up in the wonderful city of Austin,” said McKaskle, director of Street Youth Outreach at Micah 6. “They’re part of a really awful system the city provides for its young people.”

McKaskle spoke Thursday evening alongside three other community leaders at a panel — hosted by Texas Hillel and University Interfaith Council — aimed at discussing ways of addressing homelessness around campus.

The other panelists were Lori Warren of Keep Austin Housed, Val Romness of the Challenger, a local street newspaper featuring homeless writers, and Steven Hebbard of Community First! Village, a master-plan community that provides affordable housing for the disabled, chronically homeless.

With help from his wife and a group of formerly homeless caretakers, Hebbard is developing a home of sorts at his village that will sleep roughly 55 chronically homeless people — defined as a person who has been homeless for more than a year — from east Austin.

“We’re doing that work with people that are formerly homeless and in many cases have experience with hospitality,” Hebbard said. “The creative talent is intense, but folks in many cases need a situation to channel that talent.”

Many of the panelists discussed how one of the root problems leading to homelessness is a lack of a home life or families, with many coming out of foster care. The absence of a family or community is one of the issues that later lead to the addiction and violence that fuel stereotypes and backlash from passerbys, panelists said.

Alice Lazare, a government and women and gender studies senior, is preparing to join the Episcopal Student Center on a faith-based service corps trip next year, where she will be able to use some of the skill sets and ideas discussed during Thursday’s panel.

With students living in a dense area close to homeless populations, students need to find a way to peacefully cohabitate, perhaps by simply offering a friendly greeting or salutation, Lazare said.

“It seems really simple, and I get that it’s hard,” Lazare said. “It’s not a contract to talk to every homeless person you see ever again, it’s just saying ‘hi.’”

After the panel discussion, McKaskle said he continues to help as many youth as possible with his organization because he only wants what’s in the best interest of those he serves on a day-to-day basis.

“When I turned 60, I said that I didn’t want to spend the next five years of my life working a nine to five job,” McKaskle said. “I want to do something for the world, problem-solving. But I want to do whatever I need to help the world, because I like doing that.”