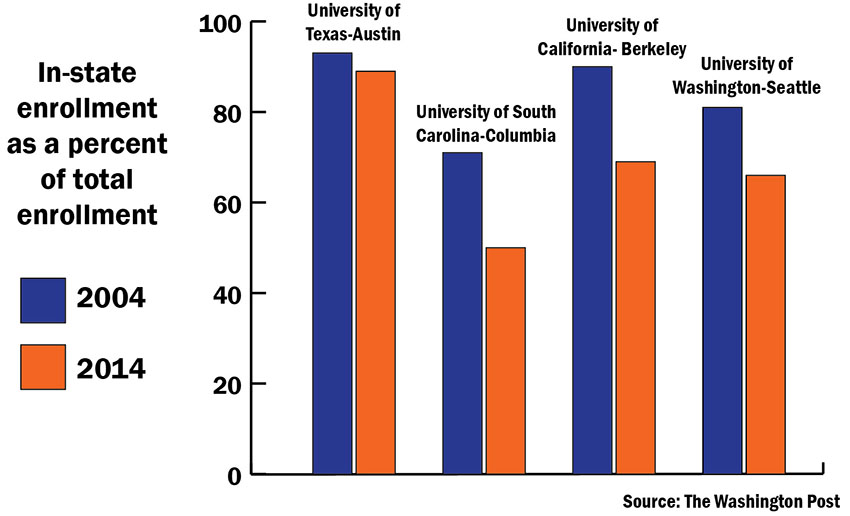 When Jon Burstain came as a freshman to UT Austin from Iowa, he didn’t know anybody on campus.

“I originally thought everyone had a Southern accent,” said Burstain, a finance junior. “I was totally wrong.”

At many public universities, the in-state percentage of new freshmen has fallen as more out-of-state students enroll. At the University of Alabama, for example, 72 percent of incoming freshmen were classified as in-state in 2004. In 2014, only 36 percent of incoming freshmen came from Alabama, outnumbered by their out-of-state peers. At the University of South Carolina, the enrollment of in-state freshman dropped from 71 percent in 2004 to 50 percent in 2014, according to a data analysis from the Washington Post.

But at UT, the in-state student percentage has largely remained the same over the years. The top ten percent rule mandates that 90 percent of incoming freshmen must come from within the state, limiting the number of out-of-state and international students to 10 percent, UT President Gregory Fenves said.

“There’s also now a financial dimension to it that is, I think, pretty pronounced in a lot of states, especially the flagship institutions,” Pernsteiner said.

UT administrators declined requests to further on this issue.

Burstain, the director of the Student Government’s Out of State and Transfer Students Agency, said he would like to see more out-of-state students accepted into UT. Since the Texas legislature has decreased state funding to “abysmal” levels for public universities, Burstain said, they should consider allowing UT to admit more out-of-state students to UT. While the state funded 47 percent of UT’s budget during the 1984-1985 academic year, the state only funded 12 percent of UT’s budget in 2013-2014 academic year.

“You add quite a bit of diversity and an eclectic array of ideas from different regions in the Untied States,” Burstain said.

However, Shawn Killian, aerospace engineering junior from Chicago, said the University does not need nor necessarily should take more out-of-state students.

“I kind of like the fact that there aren’t too many people [from out of state],” Killian said. “I really get to let myself learn what it means to be a Texan.”

“These are add-on students,” Birgeneau said. “[They] have not displaced Californians. Out-of-state students provide the funds that enable us to provide financial aid to middle-class Californians.”

Education professor Beth Bukoski said if UT were to take more out-of-state students, the University would need to consider how it would remain true to its founding as public institution to serve Texans.