Four things we learned at the spring game 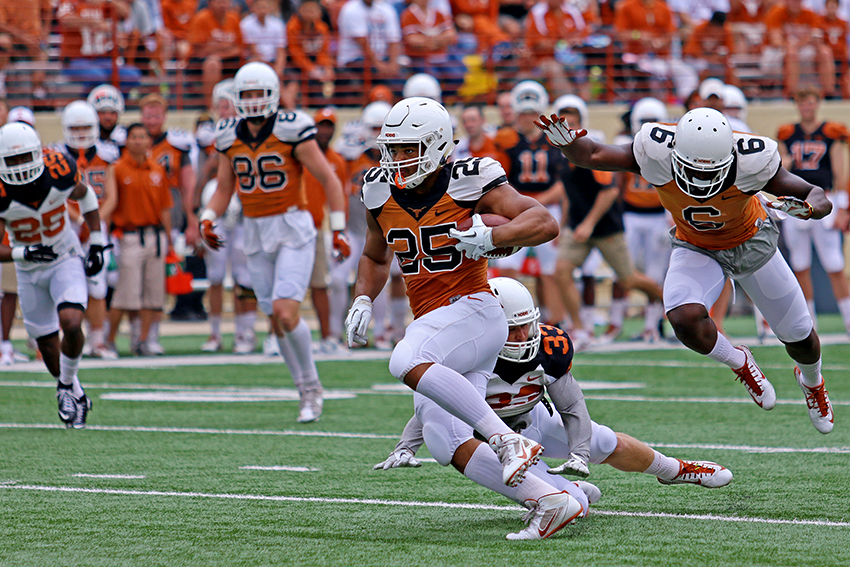 Fans got their first look at what the 2016 season could hold with the annual spring game on Saturday. The “Texas” team took the 21-7 rain-shortened contest, but the intrigue was more about what was shown on the field, rather than the scoreboard.

Here are four things we learned from the spring game.

The question for the entire spring (and really the last six years) has been who will be the quarterback. But freshman Shane Buechele might have given an answer to that question with his performance Saturday.

Buechele opened the scoring with a 27-yard strike to junior wide receiver Armanti Foreman at the front corner of the end zone, then showed his arm strength with passes of 41 and 65 yards to sophomore wide receiver John Burt.

“When he came into the system, it’s something he’s been accustomed to,” Strong said. “It wasn’t hard for him to come in and make those throws and put the ball where it’s supposed to be put.”

Meanwhile, his competition, senior Tyrone Swoopes, struggled in his turn in front of the fans. He finished the day 4-of-16 for 71 yards and two interceptions, although both came off of
tipped balls.

Still, offensive coordinator Sterlin Gilbert said he’s not rushing to any decision over who will start come September.

While most eyes were on the quarterback battle, running backs sophomore Chris Warren and junior D’Onta Foreman each took their own turn in the spotlight. Foreman opened the game with a 28-yard run and later scored on a 4-yard run, while Warren later scampered for a 51-yard score, nearly untouched the entire way.

The two backs finished the day with 174 yards on 16 carries and two touchdowns. Gilbert said he’s never had running backs as big as Foreman and Warren, but it brings an aspect that other might not have.

“They’re both big and they’re both physical,” Gilbert said. “We’re obviously going to utilize those guys on our offense.”

Another big question coming into the spring game was how quick the tempo would be under Gilbert — a question the Longhorns quickly put to rest.

Texas ran 100 plays in the 30 minute contest, with the majority of the snaps coming before the play clock reached 20 seconds. Gilbert said the installation of his offense was about the same as the other places he’s been.

“I think we’re right at the right stage that I’ve been at those other places,” Gilbert said.

The Longhorns defense had a mixed day on Saturday.

On the one hand, the defensive unit had a great day in the secondary, breaking up passes and forcing turnovers. Sophomore cornerback John Bonney and junior cornerback
Antwaun Davis each came away with interceptions and senior defensive end Quincy Vasser grabbed a fumble recovering.

But the defensive line still appears to be a problem — at least until the freshman class arrives on campus. The defense allowed 241 yards on the ground, including the 51-yard touchdown run by Warren. Strong said a lot of the struggles came with them maintaining their assignments.

“It was more about guys wiped across the gap when you talk about gap assignment,” Strong said.