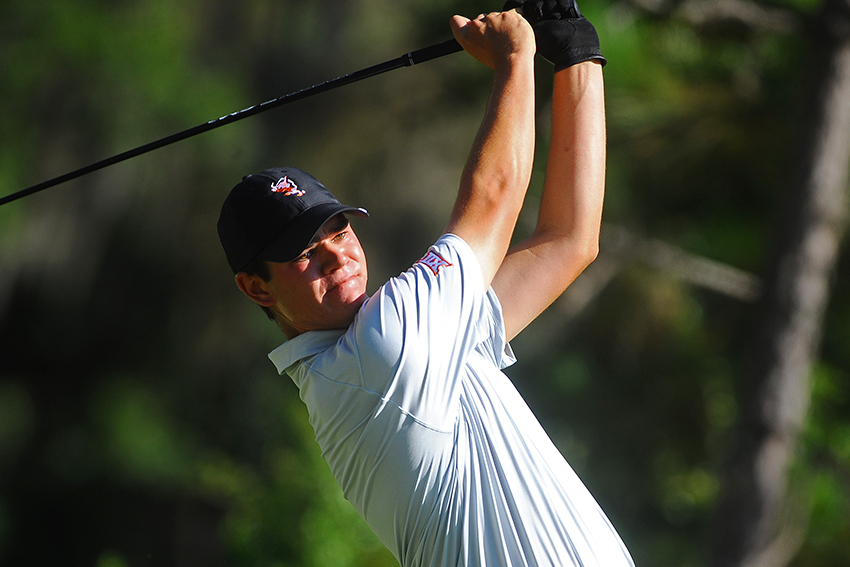 Heavy rains forced Sunday’s final round in Ardmore, Oklahoma to be canceled, causing the Maxwell Intercollegiate to end after 36 holes Saturday. Nonetheless, the No. 1 Longhorns had done their damage, and it was good enough for their fifth win of the season.

“We knew coming in that weather might be a factor and thought the first 36 holes could define the winner,” head coach John Fields said. “It is a little bittersweet, because all of our guys wanted to compete [Sunday]. However, a win is a win and the pressure was there [Saturday].”

Texas finished the tournament at 13-under par and won by five shots. Junior Gavin Hall notched his second victory of the season and his career, winning by two shots at 6-under after firing rounds of 66 and 68.

“I’m really happy for the team and Gavin Hall,” Fields said. “His 66-68 definitely deserved a tournament championship, his second in college golf.”

Hall has come on since the start of the spring season and is yet to finish outside the top-20 in his last seven starts. He tied for first back in February at the John A. Burns Intercollegiate in Hawaii.

Redshirt sophomore Taylor Funk tied for 22nd. Junior Beau Hossler, a five-time winner this season, tied for 28th. It’s the first time Hossler has finished outside the top-10 all season.

Freshman Steven Chervony competed as an individual and tied for 49th.

The Longhorns’ postseason begins April 29-May 1 when they head to Trinity, Texas for the Big 12 Championship.