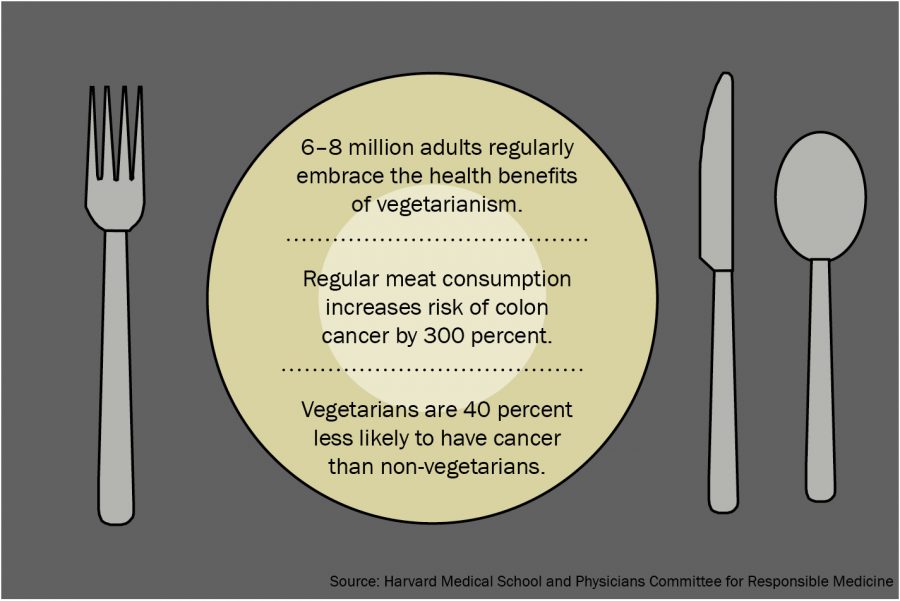 Moral and religious obligations are often cited as reasons for taking on a plant-based diet. Both of these are perfectly valid reasons to eliminate meat from one’s diet, however, no matter what the original purpose, most vegetarians end up with similar health benefits.

6 to 8 million adults regularly embrace the health benefits of vegetarianism, which range from a lower risk of developing cancer to having more energy. Cancer risk is reduced because vegetarians’ diets are high in fiber and low in saturated fat. Vegetarians are 40 percent less likely to have cancer than non-vegetarians, and women who eat a more plant based diet are less likely to get breast cancer.

The lower levels of saturated fat vegetarians consume also make them much less likely to suffer from heart disease. A vegetarian diet, combined with regular exercise and and stress reduction techniques, can even reverse damage done to arteries. It can also reduce the effects of or completely reverse the impact of type 2 diabetes.

Being a vegetarian can also help people control their weight, avoid osteoporosis and avoid toxic chemicals. Besides health benefits, a vegetarian diet has proven to be much better for the environment.

While there are many health benefits, vegetarians, especially new ones, dive into a diet of junk food. Pizza, soda, candy, and lots and lots of carbs are after all, vegetarian. The most important part of becoming a vegetarian is making sure that one’s diet remains high in protein and actual vegetables, because that can be the hard part. Many vegetarians develop vitamin B12 deficiencies as B12 is only naturally available from animal sources.

There are many types of vegetarians and vegans, ranging from vegan, which is no meat, dairy, fish or eggs, to pescetarian, in which meat is the only thing eliminated. Vegetarians have a wide range of protein options available to them, and considering the wide availability of articles involving quick vegetarian meals, it is a small feat to eliminate meat.

The health benefits and ease of vegetarian and veganism make them preferable to more meat-based diets. The support in Austin and on campus through campus organizations, as well as the health benefits, should allow more students to reap the benefits of vegetarianism. Being in such a vegetarian friendly city, more students should take advantage of the merits of a plant-based diet in order to not only save animals, but also to help themselves.