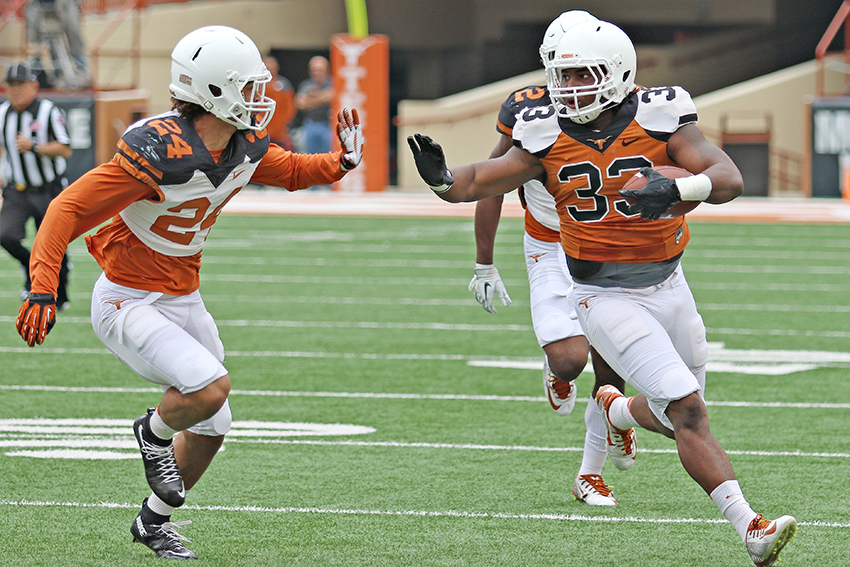 Texas will have a crowded backfield next season with junior D’Onta Foreman and sophomore Chris Warren competing for the starting job.

“What is great about both those guys, is at practice, meetings, they are working together,” Strong said. “Sometimes guys get their feelings hurt. Some guys get up an ego. There is no ego in either one of those guys. And it has been fun.”

Both running backs have had their fair share of success at Texas. As a sophomore, Foreman carried the ball 95 times for a team-high 681 yards adding five touchdowns and leading the Big 12 with an average of 7.2 yards per rush.

Warren burst onto the scene in his freshman season, as he rushed for a total of 276 yards and four touchdowns in his first collegiate start against Texas Tech. Warren finished his season with 470 yards and an average of 6.6 yards per rush.

“I don’t think [we can be stopped],” Foreman said. “Not with me, Chris Warren, Rod [Bernard] and whoever else comes in and runs the ball. I feel like we [can’t be stopped].”

Foreman’s mentality was on full display in the spring game. The two running backs rushed for a combined 174 rushing yards and two touchdowns on only 16 carries.

“I felt like we did what we were looking for, and were really productive,” Warren said. “The more time we have with this system, I think we’re going to get even better at it.”

New offensive coordinator Sterlin Gilbert said the bulky size of both running backs gives the fast-paced offense a unique advantage that opposing defenses will have to game plan for.

“They are both big and physical,” Gilbert said. “It brings an aspect to your running game that a lot of people don’t have. We are very fortunate with those two guys. We are obviously going to be utilizing them on our offense.”

Texas has a history of producing big-time running backs, like Ricky Williams and hall of famer Earl Campbell. And after an encouraging spring game, similar expectations are now in place for Foreman and Warren.

“We just got to work hard every day,” Foreman said. “That’s what [running backs] coach A.J. preaches to us. If we listen and do what we are supposed to do, I feel like the sky is the limit for us.”