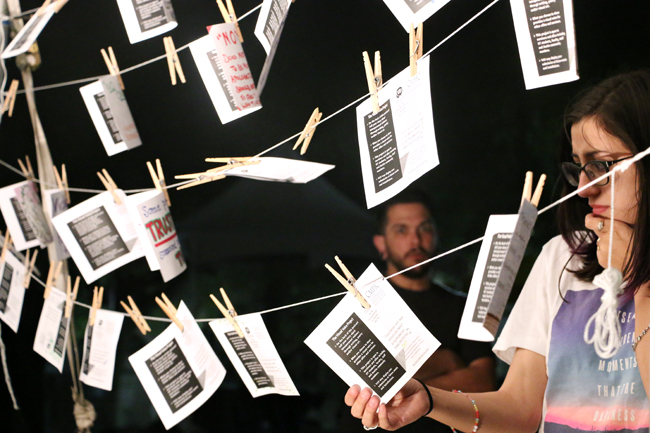 April is Sexual Violence Prevention Month, but prevention and response to interpersonal violence is the year-round work of Voices Against Violence.

VAV is a program of the UT Counseling and Mental Health Center that supports students who have been impacted by relationship violence, sexual violence and/or stalking. VAV provides survivors with resources and services, such as individual and group counseling and advocacy.

One of the most crucial resources that VAV provides is the Survivor’s Emergency Fund, which provides survivors with financial assistance for expenses related to their trauma. The fund covers a wide range of possible costs; it can be anything from getting locks changed to legal fees.

In 2005, Orange Jackets donated $10,000 to begin the VAV Endowment, but for an endowment to be considered complete, it must hold $25,000. Through the years, the fund has nearly doubled and currently contains $19,675.45. But an incomplete endowment cannot be utilized, which is why raising the remaining money is a necessity.

A fully funded endowment will sustain the Survivor’s Emergency Fund so that it will be able to meet the fiscal needs of UT student survivors indefinitely. By completing the endowment and growing the VAV Survivor’s Fund, UT will send a powerful message to survivors saying, “We believe you, we support you, and what happened to you was not your fault.”

A huge portion of VAV’s work centers on interpersonal violence prevention through education and outreach (such as events like Take Back the Night and Breaking the Silence, workshops on rape culture and intervention, and Theatre for Dialogue’s “I Like, LIKE You” and “Get Sexy. Get Consent.” performances).

And while prevention is absolutely essential, we cannot ignore the many thousands of survivors on campus who have already been impacted by interpersonal violence.

According to the AAU survey of UT undergraduates that was conducted last spring, 23.2 percent of women, 24.6 percent of trans, genderqueer and gender nonconforming students, and 6.1 percent of men on campus have experienced sexual assault (which was defined by the AAU as “nonconsensual sexual contact involving physical force or incapacitation or coercion or absence of affirmative consent” or “attempted penetration using physical force”).

These statistics are horrifying and should outrage every member of this community. But these staggeringly high numbers don’t account for the full scope of student survivors who may need to access the Emergency Fund — students who have been impacted by relationship violence and/or stalking.

As long as UT students are impacted by interpersonal violence, the Survivor’s Emergency Fund will require funding, and it is time we establish permanent sustainability.

Goldstein is a radio-television-film and Plan II freshman from South Orange, New Jersey.