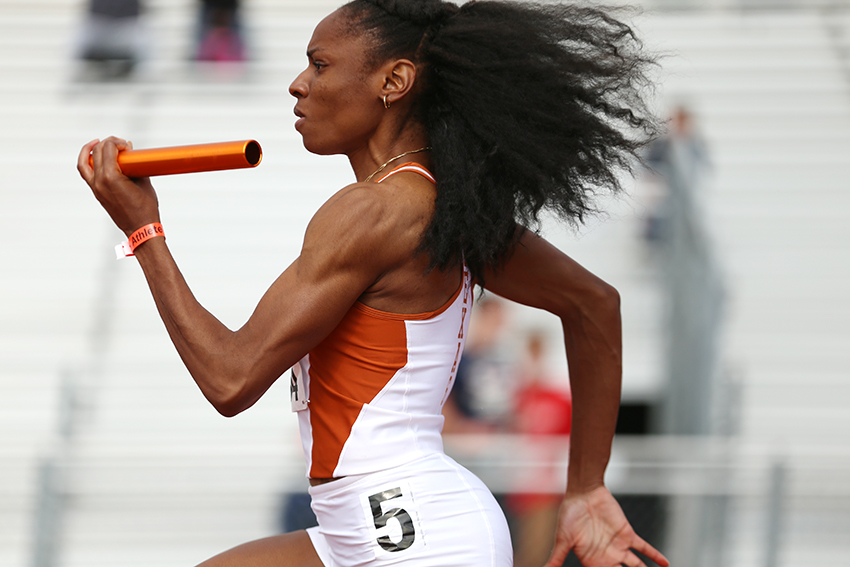 The NCAA Championships are still over a month away, but senior Courtney Okolo showed why she’ll be one of the favorites to win the 400-meter title this weekend.

Okolo destroyed the field and her own collegiate record in the event Saturday at the LSU Alumni Gold meet, coming across the line with a time of 49.71 seconds.

“I wanted to run that fast,” Okolo said. “We’ve been talking about it and training has been looking like I could run that fast, so it was just about executing.”

Okolo wasn’t the only one who had a strong performance Saturday. Fellow senior Morolake Akinosun ran the fastest time in the NCAA this year in the 100-meter race with a wind-aided time of 10.97 seconds.

Freshman Asa Garcia came away with a win in the triple jump with a distance of 13.38 meters on her last attempt. The mark puts her second in the NCAA this season.

“Asa winning the triple jump after fouling her first two attempts of the competition, that shows a lot of character,” head coach Mario Sategna said.

Meanwhile, the Longhorn men also came away with a successful day in Baton Rouge.

Junior Byron Robinson added to the success as he exploded to the top of the NCAA once again with a time of 49.10 seconds in the 400-meter hurdles, beating his current season best of 49.48 seconds.

“Watching Byron Robinson run 49.1 and then walk away and the first thing he says is, ‘I’m so close to going in the 48’s,’” Sategna said. “I know his goal is to hit that and surpass what our school record is.”

On the field, freshman Steffin McCarter placed third amongst the best in the invitational long jump with a leap of 7.65 meters (25 feet, 1.25 inches). Jumps freshman Ika Morton and senior Basil Fares also had a 2-3 finish in the long jump collegiate division.

Finishing off the day was the team of Givans, Bilderback, Bailey and Robinson in the men’s 4×400-meter relay with a time of 3:06.06 to take third overall.

The Longhorns will be back in action beginning Thursday at the Drake Relays in Des Moines, Iowa.