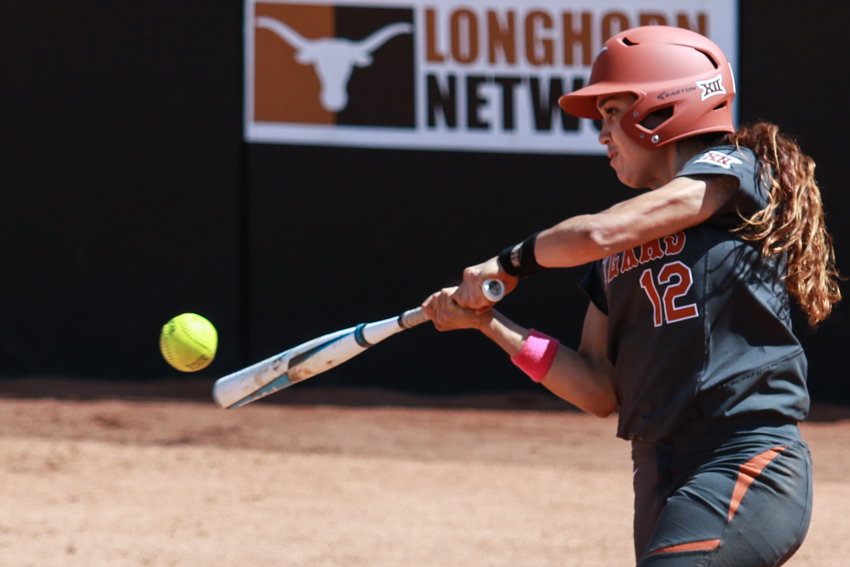 It didn’t come easy, but Texas earned its first Big 12 series sweep of the season with a 8-7 victory over Oklahoma State on Sunday afternoon.

“It reassures us that we can be one of the top teams and it pumps us up,” sophomore pitcher Paige von Sprecken said. “We play with a lot of heart, and that’s a really great quality that we need to go far in the postseason.”

Texas’ pitching wasn’t at its best in the finale, and Oklahoma State jumped on starter junior pitcher Tiarra Davis to take an early 2-0 lead behind three straight hits in the third.

The Longhorns responded in the same inning, using two singles and a walk to load the bases. A wild pitch from OSU senior pitcher Kacy Freeze scored a Longhorn run, and on the next pitch von Sprecken blasted a three-run homerun to help Texas take the lead.

“The ball looked so big and I just tried to keep it simple,” von Sprecken said. “I love being part of a team, and I’m just trying to help out in any way I can.”

Oklahoma State sent junior pitcher Shea Coats to the circle for Freeze, but a passed ball, wild pitch and illegal pitch put another Texas run on the board before the inning ended.

The Cowgirls cut into the lead on a two-out RBI single in the fourth. Davis responded with a RBI single up the middle to put the Longhorns back up by three, 6-3.

But the lead wouldn’t last long as Texas ran into trouble in the fifth. After a pair of Oklahoma State RBI singles cut Texas’ lead to one, a controversial play riled up the Longhorns. Cowgirl sophomore catcher Vanessa Shippy hit a fielder’s choice to UT junior Kelli Hanzel, but the first baseman’s throw to home wasn’t on time and the umpire said she didn’t touch first for the out.

Hanzel protested to no avail and everyone was safe, loading the bases and tying the game at six. The next batter sent a line drive straight to Hanzel, who emphatically tagged first to turn the inning-ending double play. She then sent a two-out, solo home run right down the left field line in the bottom of the fifth, making the score 7-6.

“[Hanzel] competes so hard and she was just so emotional,” head coach Connie Clark said. “I said ‘put your emotions into your play’ and boy, to have her get that ball out of the yard when we needed it, she gets the grit award for sure.”

Oklahoma State hit a homerun of its own to tie the game in the sixth, but von Sprecken’s career-high fourth RBI of the game in the bottom of the inning clinched the win for Texas.

“They played with a tremendous amount of grit,” Clark said. “They didn’t feel pressured, just kept playing the game and I was really proud of them.”