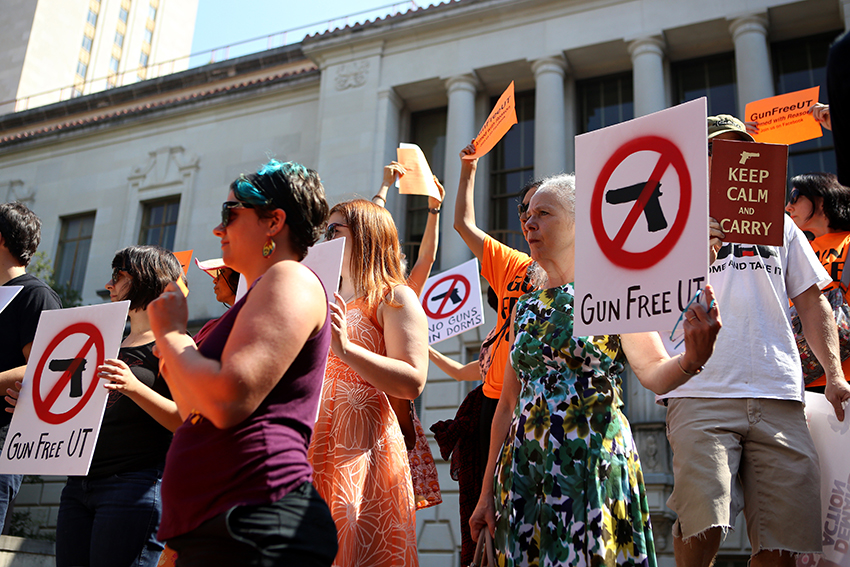 There were 372 mass shootings in the United States in 2015 — more shootings than days in the entire year. Texas’ campus carry bill disrespects the great number of people who are killed in a shooting annually, 475 in the last year. The bill will make carrying a gun more accessible on campus, blatantly ignoring how this could increase the already high anxiety levels on campus. UT must answer for accountability when it comes to the policies it intends on implementing with campus carry should something go wrong.

This is not a new phenomenon. In 2012, twenty-eight people were killed  in Newtown, CT at Sandy Hook Elementary School, when Adam Lanza brutally murdered 6- and 7-year-old children and their teachers for unknown reasons. The parents of these children are, rightfully, seeking out justice for this atrocity. In their search for accountability, they are looking beyond the shooter to the actual gun manufacturer.

Gun manufacturers are shielded from liability for illegal actions involving their guns by the 2005 Protection of Lawful Commerce in Arms Act. The argument is that as far as they are concerned, all guns are legally obtained, and will be used for their intended purposes. The proposed Gun Dealer Accountability Act would take away some of that freedom and require stores that tend to put guns in the wrong hands, directly or indirectly, under more inspections.

The problem is that we have seen time and time again that this is not the case. Less than 10 percent of murders are committed with legally obtained guns. Gun manufacturers know this, and take advantage of it anyway. The gun Lanza used was obtained from his mother; he was not licensed to use it.

The parents of Sandy Hook are suing the gun manufacturer, arguing that gun manufacturers and gun dealers have been negligent in ensuring the safe and legal use of their guns. Furthermore, they are claiming that the gun manufacturer took a gun originally for military use and “peddled it to the civilian market,” according to CNN. They did so in order to make money and not for the good of society.

As Fenves recently finalized campus policies regarding campus carry, he was nervous about faculty and student recruitment and retention. This is understandable, especially in light of the recent high profile departure of Fritz Steiner, the dean of the School of Architecture. As of now, there is no plan of action as to who will be held accountable should these campus carry policies go astray.

While the intentions of protection seem sound, they are unrealistic. We are in a high pressure environment, and one in which guns are hardly used for good. Ultimately, the accountability standard has not been established. If this case reverses precedent, ultimately, the makers of the policy should be held accountable for any misuse of the campus carry policies. Considering the university and state government are enabling the ownership of guns on campus, they must also accept responsibility.