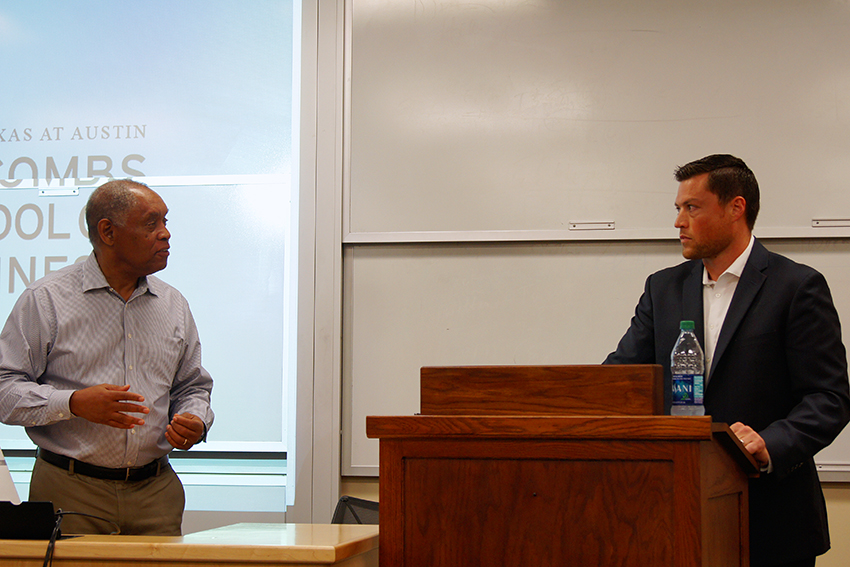 At the beginning of the debate hosted by the Adam Smith Society, Dustin Stewart, moderator and business graduate student, polled the audience and found the majority of students opposed a national minimum income. The term means every citizen would receive a certain amount of money every month once they reach a certain age.

“Since the recession, the rich are getting richer, the poor are getting shoved down, and the middle are going away,” Ripley said.

Ripley argued the income is needed because robots are increasingly taking over human jobs.

“Once you automate things, one person writes the code and all of the robots do the work,” Ripley said. “There’s no need to train people to do these things, so there’s going to be less jobs and we need to do something about that.”

Ripley proposed every citizen receive $1,000 a month once he or she turns 21 years old, arguing this would alleviate poverty.

“U.S. programs to eliminate poverty have largely failed for the past 40 years,” Ripley said. “Giving money directly to those who need it most allows individual freedom and liberty.”

Doggett said he agreed these problems exist and need a solution, but did not think Ripley’s plan is the answer for various reasons.

“A thousand dollars is not enough for people to live a decent life but more importantly … we don’t want to give people money in exchange for doing nothing,” Doggett said.

Doggett said his solution would be to implement a progressive negative income system, under which those earning above a certain level would pay taxes and those earning less would receive a supplemental income instead of paying taxes.

“Instead of just giving money to people, we would give them an appropriate amount of money to survive,” Doggett said. “As you make money you will be taxed, but you’ll be able to make more and more money without losing your benefits.”

“Although both ideas are similar, it seemed like an improvement on the idea of just giving people money,” Goodman said. “It provides incentive to work while there still are jobs.”