Byron Robinson’s journey to Texas couldn’t have been brighter 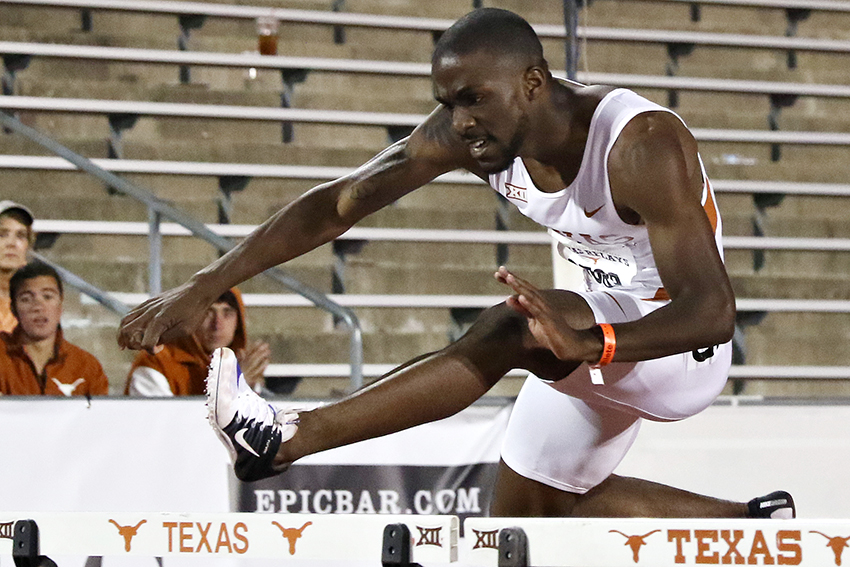 After the Penn Relays two years ago, then-freshman Byron Robinson asked for his release from Penn State.

“There were rumors the coach was going to leave,” Robinson said. “I didn’t want to be left high and dry.”

As a native of Richmond, Virginia, Robinson wasn’t akin to the cold conditions and training on an indoor track. He went to Penn State because it was the first school that offered him a scholarship.

“I wasn’t really trying to see everything else and make some sort of grand decision,” Robinson said, “I didn’t want to be cocky and make a big fuss out of it.”

Robinson started realizing his speed as a football player. He enjoyed the positions that showed off his speed: running back, cornerback and kick returner. His first steps on a track awed spectators clocking a 57 second 400m in the 6th grade. Robinson continued his career as a football player until the end of his sophomore year of high school, when he moved to Chesapeake, Virginia, and started school at Western Branch.

Robinson was always a talented 400-meter runner, but his eagerness to try hurdles showed when he would practice hurdling over the entrance turnstyles at track meets. It was late into his junior season, so his coach didn’t want to risk injury but promised he would get to try them senior year.

In his senior year, Robinson won state in the 300-meter hurdles and was a member of the first-place 4×400 meter relay.

After his career at Penn State, Robinson’s high school coached reached out to Texas. Robinson knew he wanted to be somewhere warmer where he could train year-round. Meeting the team at World Juniors’ Trials in Oregon showed it would be the perfect fit for him.

“Byron automatically clicked with my brother and I,” junior Charles Amnunu said.

Robinson found himself just one floor above Amnunu and his twin brother Carlton at Jester East that fall, spending Sundays at Waffle House with pecan waffles, talking about anything from politics to video games. On the track, though,  it’s all business. Now a junior, Robinson motivates the people around him.

“His enemies are my enemies and vice versa,” Amnunu said, “We don’t talk to anyone from the other teams; it’s all about that wartime competition.”

Robinson tells people he isn’t feeling good or it isn’t his day as a race approaches. But when he steps on the track, he transforms, letting out a yell.

“That’s his little thing,” sophomore 400-meter hurdle runner Ariel Jones said. “That’s how we know he’s going to go out there and do something big.”

Last week, Robinson ran a No. 1 time of 49.10 seconds in the 400-meter hurdles. This week, Robinson will join several of the Longhorn top sprinters to compete at the Drake Relays in Des Moines, Iowa.

“Byron’s a strong person and a hard worker. I already knew that since he ran that 49.1; he’s going to get 48 pretty soon.” Amnunu said.

“I want to see how far I can go with track,” Robinson said.