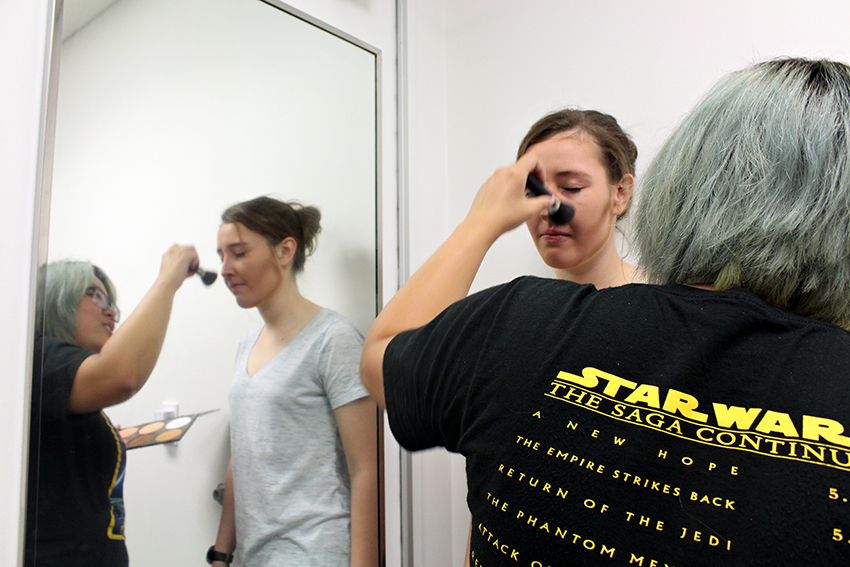 Sandy Lam, psychology and English senior, chair of the committee and an actress in the show, said she joined the committee and wanted to lead it because of its mission to showcase different artists and what they do best.

“I love this committee because it’s theater for everyone, whether you’ve been in theater all throughout high school and college or you just want to try it out for the first time,” Lam said. “There are people in here that only dance, or only do music, or only act. This committee creates a place for them.”

Adriana Tapia, corporate communications junior and one of the lead actresses, said this was her first time in such a big role and never imagined herself doing this type of work before college.

“This musical follows the story of a writer, Charlotte, who writes a story, ‘The Undead Chronicles’ but when they try to get it made into a Hollywood production, the story gets overly dramatized and the characters are oversexualized,” Tapia said. “My character, Reagan, is Charlotte’s biggest fan, and helps her win her story back.”

Lam said in her second year in the committee, the group had dwindled down to five members, and so she applied to be an officer to bring the committee back to the big, vibrant group she had experienced her first year in the organization.

“In 2013, when we had only five members, we put on a 10-minute show,” Lam said. “We rehearsed four times, it was terrible, but it was a lot of fun. I knew that I wanted to lead the committee so that I could help the group gain more talented people and put on talented productions again.”

Cody Knoblock, aerospace engineering junior and the technical director for “Young Adults,” said the production is completely student-produced and student-run.

“The play was actually written and composed by one of our committee members, Jordan Tucker, who’s studying abroad in Japan right now,” Knoblock. “This is the fourth spring musical our committee has put on, and to my knowledge, we only put on student-produced plays.”