Longhorns get swept in doubleheader as offense struggles 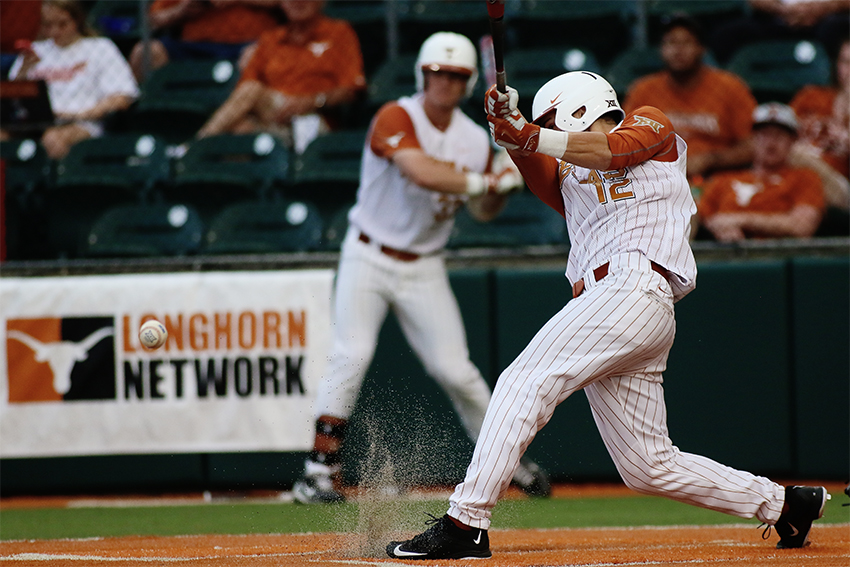 But that same offense was shut down at UFCU Disch-Falk Field on Saturday, scoring three runs in 18 innings as the Longhorns dropped the three-game series’ first two matchups against Oklahoma State.

“We did not get enough runs to cover the mistakes we made,” head coach Augie Garrido said. “The game is about imperfections. They were imperfect, we were more imperfect. That’s what separated the two teams..”

Junior Morgan Cooper may as well have been the only Longhorn on the field in game one of the Saturday twin bill. The lanky right-hander started off the game with three straight strikeouts and looked nearly unhittable throughout the afternoon, striking out eight and ceding just two hits over his six and one third innings of work.

“[Cooper] pitched a great game,” Garrido said. “He had 95 pitches, which is a high mark for him, and they were efficient. It gives us another quality starter that can go deep into the game against a good team.”

But Cooper’s performance wasn’t enough to bring the Longhorns a victory. Texas’ offense was anemic throughout game one, suffering a shutout at the hands of Cowboys pitcher Thomas Hatch.

Oklahoma State scored its first run in the fifth via a base hit following a misplayed bunt by Cooper. And while the Longhorns ended the frame with minimal damage, that one run was more than enough for Hatch.

Leadoff singles and sac bunts put Longhorns at second with one out in the first and eighth innings, but Hatch stifled both rallies. The sophomore stayed strong through all nine innings en route to a complete game, 3-0 win in the opener of the three-game series.

“[Hatch] is probably one of the best we’ve faced all year, if not the best,” junior catcher Tres Barrera said. “He commanded his fastball on both sides of the plate … and I tip my hat to him.”

The second game of Saturday’s doubleheader started in inauspicious fashion, with Texas falling down 2-0 in the first.

But after the rough first frame, starting pitcher Ty Culbreth settled in, throwing four consecutive innings of shutout ball. The senior left hander cruised as the Longhorns tied the game via a pair of run-scoring singles opening two frames.

However, the tie would evaporate in the sixth as the Longhorns surrendered three runs. A double to kick off the inning was promptly followed by an RBI single past sophomore shortstop Joe Baker, giving the Cowboys a 3-2 lead.

More damage was done by the Longhorns defense following the base hit. Sophomore outfielder Patrick Mathis misplayed a deep fly to right, allowing the ball to fall off his glove. The miscue allowed runners to advance to second and third, with both scoring via a sacrifice fly and an untimely single off Culbreth’s leg.

“Success breeds confidence but when somebody doesn’t succeed their confidence goes down,” Barrera said. “We’ve got to play cleaner baseball and give ourselves a better chance.”

Texas’ best chance to even the score came in the seventh. The Longhorns loaded the bases with one out, but netted only one run as a dribbler past the pitcher was sandwiched between a pair of strikeouts.

After entering the series tied with Oklahoma State for third in the Big 12, Texas now finds itself two games behind the Cowboys. A lackluster start to the season put the Longhorns in quite the hole, and Saturday’s sweep diminished much of the progress made thus far in Big 12 play.

Texas must salvage the series on Sunday to avoid dropping further in the conference standings.