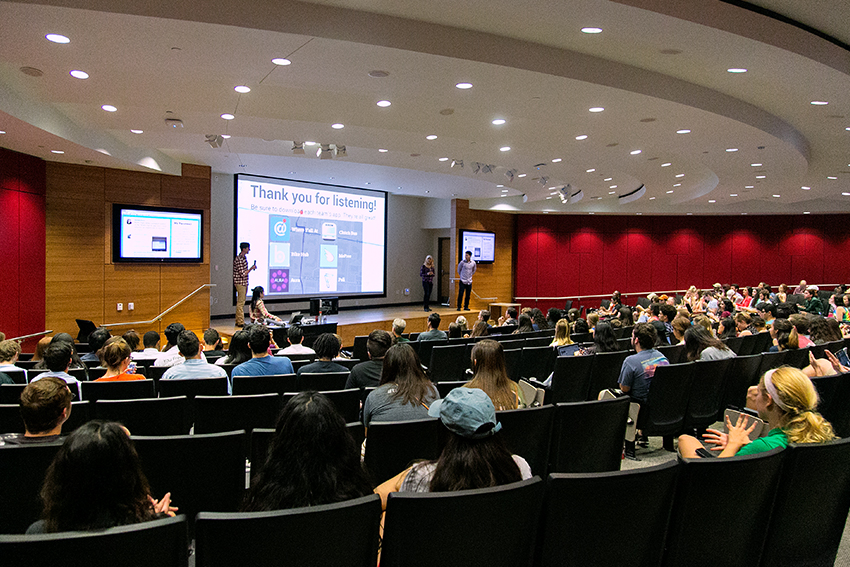 Journalism and computer science students showcased their mobile news apps that do everything from making it easier to identify LGBTQ-friendly businesses to locating bike racks on campus on Saturday.

The event was part of UT’s Mobile News App Design class, in which journalism and computer science students team up to design iPhone apps. Over the semester, teams were asked to develop ideas, program them into iOS apps and promote their work with social media campaigns.

Robert Quigley, the journalism lecturer who led the class, said the curriculum helped students from diverse backgrounds learn to collaborate.

“This is an important class to have students working together on these cross-functional teams and learning to work with each other,” Quigley said. “Journalism and computer science students definitely think about things in different ways, and in the real world, you’re going to work with people who aren’t all in the same major.”

Local software developer Jeff Linwood, who taught the coding portion of the class, said this year’s apps were a major success.

“For the first time, we’ve actually had all our students get their apps into the App Store,” Linwood said. “This is a first for this class and it’s really exciting. So you can just go ahead and download their apps onto your iPhone, your iPad.”

Computer science senior Josh Montgomery was part of the team that designed MeFree, an app that aims to make social meet-ups easier. Designing and collaborating on the app was challenging, Montgomery said.

“This was our first semester with Swift [coding language for iOS] and while we were learning Swift, we had to figure out how to create a viable app that people would want to use,” Montgomery said. “A little of the design was tricky. It started off really simple and we had to work together and collaborate to create something that would appease all of our interests.”

Journalism junior Caroline Murray, an audience member at the event, said the skills demonstrated were very applicable to students’ careers.

“[The apps] are incredibly impressive,” Murray said. “I’m in the base journalism class, and they say all the time how the journalism world is growing more digital every day. Professor Quigley posted an article about how the most sought-after skills are now stuff like coding and social media and everything these teams are doing.”