The Daily Texan • May 2, 2016 • https://thedailytexan.com/2016/05/02/ut-architecture-team-wins-national-affordable-housing-competition/ 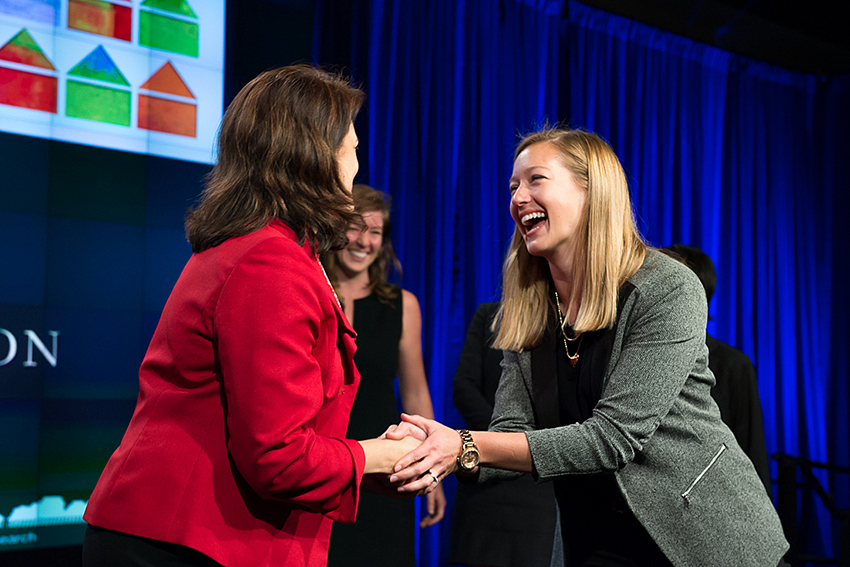 Courtesy of US Department of Housing and Urban Development

A team from the School of Architecture and Red McCombs School of Business won a national competition hosted by the U.S. Department of Housing and Urban Development in April.

Team members Sarah Simpson, Megan Recher, Brianna Garner-Frey, Tatum Lau and Brett Clark won the Innovation in Affordable Housing Student Design and Planning Competition, which concluded April 19 in Washington D.C. The competition challenged teams to create an affordable housing plan for a site in Santa Barbara, California. The finalists traveled to the site in March, so they could get a better understanding of the location for which they were designing their plans.

Brianna Garner-Frey, a graduate student in community and regional planning, said the competition was not only about architecture, but also about innovating the living experience of affordable housing.

“Our team approached the competition through three aspects of innovation,” Garner-Frey said. “One was rethinking the family, second was sustainability and third was education.”

Garner-Frey said the makeup of the typical American family has changed from the traditional nuclear family.

“There’s been a shift in demographics, where the primary form of a family is no longer a dad, a mom and two children,” Garner-Frey said. “We identified that especially in low-income communities, single mothers will rely on each other for assistance, grandparents are living with their children and grandchildren now more than ever before, so we took those aspects into account in our project.”

Sarah Simpson, an urban design graduate student, said she thinks her team won because of a unique viewpoint and approach.

“It seemed that the other teams at the competition focused more on the architectural design of the building itself,” Simpson said. “Our team started by looking at regional plans and the surrounding community and drew from those.”

Tatum Lau, a graduate student in urban design and community and regional planning, said she believes housing is a human right and relates to other issues, such as education.

“So many of the current issues faced by impoverished communities can’t be [addressed] if you don’t have a basic home to go to,” Lau said. “This competition and other programs that focus on affordable housing are exciting opportunities for our society as a whole.”

The team’s first place win carries a $20,000 prize for the team members.