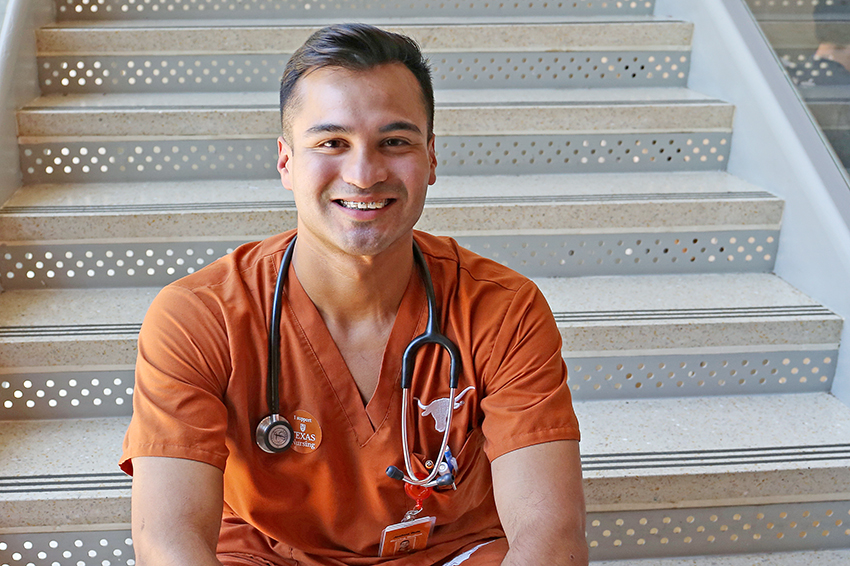 When nursing junior Josh Ruiz walks into a patient’s hospital room, all he can think about is the adrenaline about to rush through his body.

“[Giving IVs] pumps me up,” Ruiz said. “When I’m walking out in my scrubs, it feels like the gladiator gear. But for me, it’s an IV catheter and my flush.”

Male students make up 11 percent of undergraduate students UT’s School of Nursing, something Ruiz said became apparent on his first day, when he walked into his classroom and was greeted by a sea of ponytails.

“There are only six of us in my [graduating] class,” Ruiz said. “So you know everyone, it’s a tight-knit community.”

Because he is one of few males, and the only remaining student in UT’s now-canceled Naval ROTC nursing program, Ruiz said his professors recognize him and often call on him during class.

He tells prospective male nursing students that the sad truth is they don’t have to do anything to be special — they just have to be a male in a field dominated by females.

“I would like to see more male nurses because I feel like society places this notion that if you’re a male nurse, that’s a feminine job,” Ruiz said. “They’re like, ‘Are you sure you don’t want to be a physician?’”

When Ruiz was five years old, he found himself in the emergency room for a minor head injury from a baseball bat. A male nurse gave him 14 stitches and made him laugh, and from that day forward, Ruiz said he knew he wanted to go into health care.

After years of unwrapping stethoscopes and medical supply kits on Christmas, Ruiz decided to pursue nursing within the military. He said he had a desire to serve after growing up with a father in the Air Force, and a love for people which he gets from his mom.

“I like the bedside, when you’re in the funk, actually experiencing nursing and impacting lives,” Ruiz said.

Ruiz said it’s important to have both male and female nurses because each brings different strengths to the doctor’s office.

“Being male or female [doesn’t] separate what kind of nurse you’re going to be,” Ruiz said. “We are all here because we want to provide care and change patients’ lives.”